Michelle Obama Says a Woman Will Be President in Her Lifetime 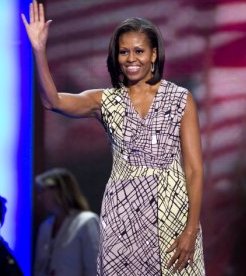 A woman will be president in her lifetime, first lady Michelle Obama speculated in an interview this week, though she wouldn't offer a prediction on whether that woman would be Hillary Clinton.

"She hasn't announced anything, so I'm certainly not going to get ahead of her," the first lady said, laughing, in an interview for Sunday's edition of Parade Magazine.

The country, she added, was "ready" for a woman commander-in-chief, but, "It's just a question of who's the best person out there."

One woman who definitely will not be the first female president? Michelle Obama.

Asked if she'll ever run for office herself, the answer was a simple, "No."

Clinton made history in 2008 by receiving more votes in the presidential primaries than any previous woman, though she eventually lost the Democratic nomination to Barack Obama.

In the interview, Obama described how her husband's election altered Americans' sense of who could become president.

"Children born in the last eight years will only know an African-American man being president of the United States," she said. "That changes the bar for all of our children, regardless of their race, their sexual orientation, their gender. It expands the scope of opportunity in their minds. And that's where change happens."

And while she will never run for office, she did detail one small way her life in the public eye had changed her life.

Asked why she ditched the bangs that caused such a stir earlier this year, Michelle Obama said, "You know, it's hard to make speeches with hair in your face!"