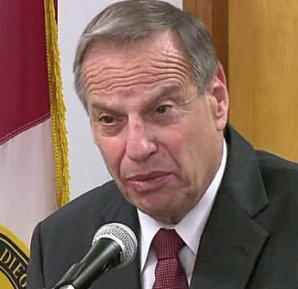 So far, 16 women have come forward to say that San Diego Mayor Bob Filner acted inappropriately, with accusations ranging from one woman's claim that the mayor gave her "tush a pat," to another woman's assertion that he "put in me what I guess now is the famous headlock."

In alphabetical order, the women are:

-- Sharon Bernie-Cloward: The president of the San Diego Port Tenants Association, Bernie-Cloward claims that when Filner was running for mayor in 2012, he approached her at a political event. "He touched me, actually groped me on my backside inappropriately," Bernie-Cloward told public television station KPBS. "I was left there startled and fearful."

-- Lisa Curtin: Curtin, the director of government and military education at San Diego City College, told KPBS that Filner grabbed her hand, fingered her wedding ring and asked if it was real. She also said he tried to kiss her; she said she moved her head and she felt his tongue on her cheek.

-- Renee Estill-Sombright: She told CNN affiliate KGTV that the mayor called her "beautiful" at a church breakfast in June, said he couldn't take his eyes off her, asked if she was married, and then said he'd like to take her out some time. The reported comments caught her off guard, Estill-Sombright said. "I said, 'Oh, thank you,'" she said. "I kind of felt weird."

-- Eldonna Fernandez: A retired master sergeant in the Air Force who served for 23 years and was deployed to the Middle East after 9/11, Fernandez met Filner at a National Women's Veterans Association of America event in 2012, where she exchanged business cards with him. "He looks at my card. He looks at me. He says, 'Fernandez. Are you married? Do you have a husband?' Very quick, very direct. I said, 'No, I'm divorced,'" she told CNN. "'Well, you're beautiful, and I can't take my eyes off you, and I want to take you to dinner.' I was really shocked and I was like, 'Uh, OK,'" Fernandez said. Then came a phone call and voice mail, which Fernandez never returned.

-- Laura Fink: A political consultant, Fink has accused the mayor of patting what she described as her "posterior" at a fundraising event in 2005. At the time, Fink was working as the deputy manager of Filner's congressional campaign. Fink told CNN that she thinks Filner should resign.

-- Veronica "Ronne" Froman: A retired Navy rear admiral and San Diego's former chief operating officer, Froman told KPBS that she and Filner, then a congressman, met a few years ago at his office after everyone had left. "He stopped me and he got very close to me. And he ran his finger up my cheek like this and he whispered to me, 'Do you have a man in your life?' " Froman said. "I jumped back. I was very, very startled. And I said, 'Yes, I have a man in my life' ... I was really rattled."

-- Joyce Gattas: A dean at San Diego State University, Gattas told KPBS that she had several "interactions" with Filner "where he's held me too tight, a kiss on the cheek, which is inappropriate, hands on the knee that last too long."

-- Emily Gilbert: Gilbert told CNN that she was hired to sing at a fund-raising event in December. Afterward, she said, the mayor grabbed her, slid his hand down the small of her back and gave her "tush a pat."

-- Irene McCormack Jackson: Jackson filed a lawsuit in July against Filner, saying she and other women were subjected to his "crude and disgusting" comments and inappropriate touching. She said she resigned as Filner's communications director in June after deciding that the mayor would not change his behavior.

-- Patti Roscoe: A prominent businesswoman in San Diego's tourism and hospitality industry, Roscoe told KPBS that on numerous occasions, Filner "put in me what I guess now is the famous headlock ... I felt fearful, even as well as I knew him, because it was an invasion into my space ... And he would come in and try to kiss me on the lips and I'd have to squirm to get away."

-- Morgan Rose: A nonprofit group founder, Rose told CNN that in 2009 she was lobbying Filner for her organization, which works with military and other families hurt by domestic violence. At a meeting with Filner in a restaurant, he allegedly looked her up and down, stared into her eyes and said, "Your eyes have bewitched me," Rose said. Filner moved to her side of the booth, sat beside her, pinned her to the wall, and put his arm around her, before he got a call and subsequently left the restaurant, Rose alleged.

-- Peggy Shannon: Shannon, 67, who works at the Senior Citizens Service Desk in San Diego City Hall, allegedly faced "continuous inappropriate sexual advances by the mayor while trying to do her job," according to the office of her attorney, Gloria Allred. The great-grandmother said the mayor kissed her and once asked "me if I thought he could go eight hours in one night." Shannon told reporters: "Every day that I went to work, I had butterflies in my stomach because I did not know what was going to happen the next time the mayor came by my desk.

-- Stacy: San Diego radio station KOGO reported on August 8 that a longtime city of San Diego employee identified only as "Stacy" had told the station of an encounter with Filner in April. Stacy, a single mother, said it was her first time meeting Filner, and he took her business card and then grabbed her hands, KOGO said. "He took both my hands and he held them. He holds them kind of around the wrist and around the hands, kind of so you can't move. I don't think it's a sexual move. I think it's more of a move of control," Stacy told KOGO. Stacy said Filner then asked her out, saying, "I'm not asking you out on a business lunch. I'm asking you out on a date."

-- Gerri Tindley: At the same National Women's Veterans Association of America event where Filner met Edonna Fernandez, he met Tindley, an Army vet who gave a speech about a violent rape that happened during her eight years of service. Filner, who was running for mayor of San Diego at the time, also was scheduled to speak. In the green room, he asked Tindley about her rape. "He got as close as he could to me. His jacket was touching my jacket," Tindley said. "I was bent down. He was bent down with me, rubbing like he cared, like he was consoling me ... I felt very weird," she told CNN.

-- Michelle Tyler: A vocational nurse, Tyler spoke at a news conference accompanied by her attorney, Gloria Allred, and said that Filner rubbed her arm during a June meeting in his office and asked for dinner dates in exchange for his helping a brain-injured Iraq War veteran. "The mayor sat back in his chair and said, 'Wow, you are really magnificent.' The mayor started rubbing Ms. Tyler's arm and stated 'Relax, you are incredible. I will help your veteran. I want you to go out to dinner with me and spend time with me,'" Allred quoted Filner as telling Tyler.

-- Kathryn Vaughn: An attorney, Vaughn told KFMB that after her husband walked away at a public event 10 years ago, Filner "made an inappropriate movement on my body."