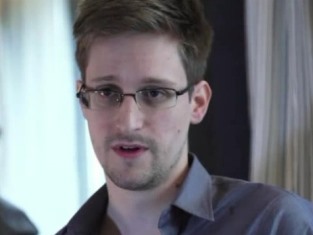 HONG KONG (CNN) -- The man who shook the U.S. intelligence community by leaking details of secret surveillance programs is believed to be staying in a "safe house," the British newspaper that worked with him reported Wednesday.

Edward Snowden, 29, checked out of his Hong Kong hotel room Monday as journalists in the city began to figure out where he was staying from a video interview published online the day before, The Guardian said.

"It is thought he is now in a safe house," wrote Ewen MacAskill, one of the Guardian journalists who helped develop articles from the information Snowden leaked. The report didn't specify where the safe house was and MacAskill didn't immediately respond to a call seeking further details.
Snowden defends his decision

As Snowden tries to stay out of the spotlight, U.S. authorities are preparing charges against him, a law enforcement source told CNN on Tuesday. But the charges are not imminent, the source said.

As authorities investigated, one U.S. congressman told CNN that journalists who published the leaked information should be punished.

And the first civil lawsuits were filed against federal officials, arguing that the surveillance programs are unconstitutional.

Snowden, a former computer security contractor, acknowledged in a Guardian newspaper interview that he gave journalists classified documents about U.S. surveillance of telephone and Internet traffic.

The FBI has been investigating the leaks, but it was unclear Tuesday how far along the agency was.

Snowden told the Guardian that he expects to be charged under the Espionage Act and said he traveled to Hong Kong in hopes that state's commitment to free speech would prevent his extradition to the United States.

Legal experts have said that Hong Kong's bilateral treaties with the United States may make it hard for Snowden to avoid eventually being sent back from the semiautonomous Chinese territory. But some have suggested that any court battle to extradite him could be very drawn out.

Debate over Snowden's actions and the surveillance programs he exposed has continued to rage.

On Tuesday, one lawmaker told CNN's AC360 that journalists tied to the leaks should also be prosecuted.

"If they willingly knew that this was classified information, I think actions should be taken, especially on something of this magnitude," said Rep. Peter King, a New York Republican who leads the House Homeland Security subcommittee on Counterintelligence and Terrorism.

"There is an obligation both moral, but also legal, I believe, against a reporter disclosing something which would so severely compromise national security," he said. "As a practical matter, I guess there have been in the past several years a number of reporters who have been prosecuted under (the Espionage Act)."

Glenn Greenwald, the Guardian columnist who was the lead writer of the articles based on Snowden's disclosures, said Monday that as an American citizen, he is guaranteed freedom of the press by the First Amendment of the Constitution.

"I intend to take the Constitution at its word and continue to do my job as a journalist," he said.

As for Snowden, King said there's no doubt he should face charges.

"I think what he's done has been incredible damage to our country. It's going to put American lives at risk," he said.

The congressman did not provide specific examples of how the leaked information damaged national security, but argued that it helps enemies of the United States.

But others, including liberal activist and filmmaker Michael Moore and conservative commentator Glenn Beck, have said Snowden is a hero for revealing the secret programs.

His disclosures have fueled new debate about the U.S. government's collection of records of domestic telephone calls and overseas Internet activity in the global hunt for terrorists and criminals.

Civil liberties advocates say the measures are unacceptable intrusions. But supporters say they are legal and have yielded evidence that has helped stop terror plots.

White House spokesman Jay Carney said Tuesday that the measures "strike a balance between our security interest and our desire for privacy."

But Snowden disputed that argument while speaking with Guardian journalists on Sunday, MacAskill reported. He described "the very idea of a trade-off as a fundamental assault on the U.S. constitution," according to the Guardian article.

At least two civil lawsuits have been filed so far against federal officials, arguing that the collection of phone records is unconstitutional and calling for a judge to block the measure.

"The practice is akin to snatching every American's address book -- with annotations detailing whom we spoke to, when we talked, for how long, and from where," the American Civil Liberties Union and several other groups said in a federal lawsuit filed Tuesday.

A Philadelphia couple who allege they were singled out for electronic surveillance because of their criticism of the U.S. military filed a $3 billion class-action lawsuit, claiming their privacy and free speech rights were compromised.

The Justice Department declined to comment on the lawsuits.