Missourians Grapple with Flooding As Mississippi River Is Expected to Crest 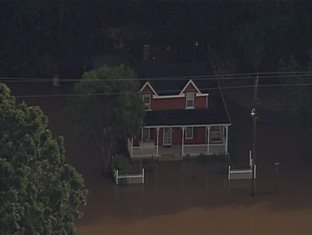 WEST ALTON, Missouri (CNN) -- The Mississippi and Missouri rivers appear to be cresting Tuesday, suggesting there may be relief ahead for West Alton, which was facing severe flooding, according to a county spokeswoman.

Officials are reinforcing levees and running checks along the system, said Colene McEntee, St. Charles County spokeswoman. Missourians are helping fortify the levees by sandbagging, and there are no reports of homes under water, though murky water could be seen inching close to front doors, she said.

No one has asked for shelter, so none are open, McEntee added.

The news was welcome a day after hundreds in this community near St. Louis scrambled to flee a broken levee.

The Mississippi River at St. Louis was more than 10 feet above its flood stage.

More rain is forecast for Kansas, Missouri, Oklahoma and Arkansas over the next several days, CNN meteorologist Indra Petersons said. While the St. Louis area may not get the heaviest rain, its location -- where the Missouri River dumps into the Mississippi River -- makes it vulnerable to rainwater rushing downstream from tributaries.

Earlier authorities urged about 300 residents to evacuate because of the levee breach in West Alton, McEntee said.

A bridge spanning the Mississippi River -- one that connects West Alton to Alton, Illinois -- was shut down after a temporary flood barricade gave way.

West Alton residents rushed to build a sandbag fortress. Volunteers told CNN affiliate KTVI they had one goal: build the wall one sandbag higher than the predicted crest.

Just five months ago, the Mississippi River was suffering from a severe drought. The river's bottom was actually bone dry in Memphis.

Since then, the river has shot up 45 feet.