Democrats and Republicans at Sharp Odds Over 2014 Budget 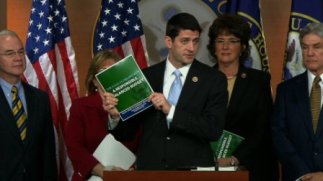 WASHINGTON (CNN) -- Lawmakers in the House of Representatives approved legislation Thursday funding the government through the end of September and avoiding a partial federal shutdown, while also softening the blow of $85 billion in forced spending cuts.

The measure, which passed the House in a 318-109 vote, cleared the Senate on Wednesday. It now goes to President Barack Obama to be signed into law.

Failure to enact a new spending bill before March 27 would have resulted in a partial shutdown of federal agencies and other programs.

While debate over the federal budget has now concluded for the rest of the current fiscal year, Republicans and Democrats are already bickering over the 2014 budget. On Thursday, the Republican-controlled House also passed Wisconsin GOP Rep. Paul Ryan's proposed fiscal year 2014 budget in a virtual party-line 221-207 vote.

No Democrats backed the measure.

Ryan, who was Mitt Romney's vice presidential running mate, would cut $4.6 trillion in spending and eliminate the deficit over 10 years, while also repealing Obama's health care law and overhauling Medicare. His plan is believed to have no chance of clearing the Democratic-controlled Senate.

Democratic senators, meanwhile, are working on a 2014 budget blueprint that includes new tax increases on the wealthy, among other things. Their plan has little chance of clearing the House.