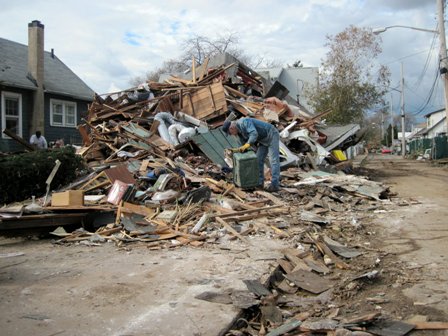 NEW YORK (CNN) -- The sky is still dark when 13-year-old Ryan Panetta wakes in his temporary apartment beneath the Brooklyn Bridge. The one-bedroom loaner has just a queen-sized bed, a couch and a folding table; he shares it all with his parents and three siblings.

He has traveled a long way from his family's beachfront bungalow to this high-rise housing. After Superstorm Sandy, his house near the Rockaways in Queens is just a shell. His new daily commute -- from makeshift home to temporary school -- can take up to two hours.

"I'm tired, really tired," he said at 6 a.m. one day in early December, already awake for a half-hour.

"It's pretty hard. It's just adjusting to the new school, the long commutes in the morning to get to school, waking up really early to get ready for school and rebuilding the house. It's tough," he said, his eyes red from sleep and sadness. "The house is destroyed and every time I look in there, it's like, 'Wow. I never thought a storm could do that much.'"

Weeks after Sandy hit, Ryan is one of many still living through the ongoing aftermath of the storm. He's one of 73,000 students initially displaced from their schools, one of about 5,400 still attending classes in borrowed spaces. His double loss -- home and school -- means his life is in upheaval.

"We lost so much. All our things, the stove I've cooked so many meals on, the home my children were born in, the kids' toys, everything except, thank God, the most valuable thing in the world, our kids," said Karen Panetta, Ryan's mother. "We can rebuild everything else. And we will."

Ryan's parents grew up in Broad Channel, and it's where Ryan, his brothers and sister lived all their lives. The Queens community is just a few blocks long, a strip of sand connected to the city by a single bridge. It was long an oasis for New York City's working class, and those firefighters, police officers, ambulance drivers and sanitation workers sandwiched homes into the blocks by Jamaica Bay. Before the storm, their ambulances and fire trucks lined the streets at nights. American flags hung near their front doors. From the Panettas' home, you can smell the sea.

The day Sandy struck started like any other -- seabirds gliding above Cross Bay Boulevard, the sunset like a post card. Joe Panetta was to work overnight as an engineer, keeping the 911 emergency lines running. Karen stayed home with their kids, Tim, Ryan, Christian and Carly.

"There were other storms," Karen said. "We got, like, an inch of water, so we sat tight and pulled a few things up off the floor, just in case."

The rainfall wasn't much more than a drizzle at the start, but the wind picked up and water rose in the street. The children had never seen their mother so frantic, looking out the front window and running to move furniture higher in their single-story home. The youngest kids, 5-year-old Carly and 8-year-old Christian, raced around to gather their toys.

"We took the clothes and took them into black garbage bags and we threw them on top of the couch and some on her bed, thinking that they wouldn't get wet. Because we never thought it would be anywhere close to being this bad at all," Ryan said.

Then the ocean met the bay and suddenly the Panettas had 4 feet of water in their home. As power lines snapped, water raced through the street, carrying debris past the house. Ryan, who swam competitively, put on his bathing suit and jumped into the dark, icy water, looking for a front door not barricaded by sandbags, for neighbors who could help.

The family spent the night shivering on the second floor of a neighbor's house. They haven't spent a night in Broad Channel since.

Just across the bridge, the swelling water inundated Scholars' Academy, the school where Ryan had made the National Junior Honor Society this year. The eighth-grader liked to tell friends how Scholars' was one of the city's top-rated schools, how he'd taken a test and interviewed to get into it, how it was filled with computers and iPads.

"No matter what you, like, learn you're always gonna remember it," he said of the school. "They make it a fun, exciting way to learn."

That night, the school's basement was filled with a mixture of sewage from a nearby treatment plant, and ocean water that poured into the first-floor classrooms, auditorium and gym. Ryan hasn't attended class at Scholars' Academy since then, either.

The family moved to a temporary apartment in Brooklyn and began making a two-hour commute to P.S. 13, another public school that sits alongside an elevated subway in East New York. Ryan went from changing classrooms through seven periods at Scholars' Academy to five periods in makeshift classrooms. There's gym class once a week, but gone are the theater performances, orchestra and Scholars' Academy Seawolves sports.

"It's crowded, there's at least 40 something kids in there," Ryan said.

Some things haven't changed. His teachers from Scholars' Academy are still leading classes, and there are 700 kids from his old school at P.S. 13.

Through it all, Ryan never missed a day of classes.

"He was a hardworking student. You know, he was very eager to learn, he participates in class all the time, he's got an infectious attitude," said Carrie James, Ryan's humanities teacher. "He was probably the student that was impacted the most, and yet he has the strongest will to be here every day."

P.S. 13 lent Ryan and his classmates books and supplies and turned its auditorium stage into a classroom. They eat in shifts in the cafeteria. There are counselors to deal with trauma and a curriculum for creating stability after Sandy.

Ryan's school won't be reopen this year. His parents have no idea when, or if, their house will be livable, either.

At the end of each day, Ryan rides a bus to their battered home in Broad Channel. The streets where he used to play ball with his buddies are lined with construction debris. His father is tearing apart what remains of the house, hoping to stem the encroaching mold, waiting on the insurance company or Federal Emergency Management Agency to provide money for a professional contractor.

All the children are helping. Even Carly, the youngest, watches a stray cat and hands tools to her brothers. It's a race against time and a desperate attempt to rebuild their little piece of the world.

By the time Ryan starts tearing into musty drywall, he has already been up and at it for 10 hours. He has a few more to go before homework and heading back to a temporary apartment an hour away.

"I always think, like, it's tough what me and my family went through," he said. "We were still in the house and just thinking about that storm and as it's going on, the water rising quick -- it's going to leave a permanent mark."

Still, he's optimistic that life will look something like it did before, like all the days and nights before the storm swallowed everything.

"I'm learning that no matter what happens," he said, "not everything can slow you down and make you give up on everything."

Poppy Harlow contributed to this report.