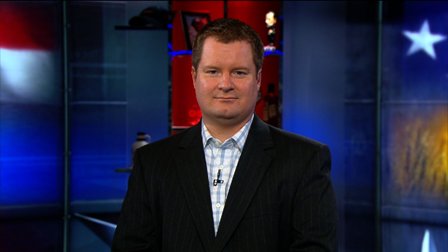 (CNN) -- Conservative activist and CNN contributor Erick Erickson wrote Friday a primary challenge against Sen. Saxby Chambliss won't be in the offing after all, pointing to the ramifications an intra-party fight would have on his family.

Earlier this week, Erickson floated the idea of challenging Chambliss after the second-term Republican senator said he would consider reneging on a pledge not to raise taxes.

"Were I to run for the Senate, it would be a terribly nasty campaign," Erickson wrote Friday on his website RedState.com, which is popular with conservatives. "It'd actually be really awesome, but it'd be really nasty. I have a seven year old, a soon to be four year old, and a wife who does not like being anywhere near a stage. I'm not putting my family through that when the best outcome would mean a sizable pay cut and being away from my kids and wife all the time huddled in a pit of vipers often surrounded by too many who viewed me as a useful instrument to their own advancement."

Erickson, who lives in Macon, Georgia, first discussed the possibility of running in a contest against Chambliss Tuesday evening and said he would discuss it with his family.

"I had been rather dismissive of it, but in the past two days have been approached by several organizations and individuals I greatly respect who have asked me to really consider it," Erickson, also a CNN political contributor, said Tuesday. "I owe them that and will consider it, but am not prepared to commit to it. I have plenty of time to think about it."

On CNN's "The Situation Room with Wolf Blitzer" Wednesday, Erickson said someone should challenge Chambliss ahead of the 2014 election, even if that challenger isn't him.

"If it's not me, I hope someone does it. It's not until 2014," he said. "I've been very dismissive of calls saying run for this thing. But in the last couple days, I've gotten a lot of calls from some prominent folks that are throwing out dollar signs of what they can raise and I think I need to treat them more seriously than I have been."

The calls, he said, were a "barometer of angst with Saxby Chambliss," though he said his wife was "firmly in the, 'I will bury you in the backyard if you run camp.'"

Reaction to his remarks, Erickson said, had been eye-opening, saying "in the past week I've learned who real friends are and are not."

Opposition to Chambliss is not new to Erickson, who has targeted his fellow Georgian for compromising on immigration and energy legislation, as well as the farm bill and federal bailouts.

"Conservatives supported him [in 2008] because we knew he was what stood between America and 60 Democrats in the Senate," Erickson said Tuesday. "But he never learned his lesson and continues to support all the compromises that have gotten us into this mess in the first place."

CNN's Kevin Bohn and Kevin Liptak contributed to this report.