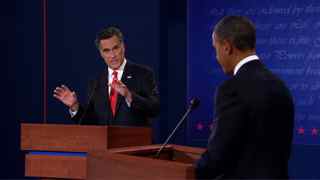 (CNN) -- Foreign policy will get increased attention in the two debates left between President Barack Obama and his Republican challenger, Mitt Romney, with the final debate set to be entirely devoted to the subject.

The slugfest between the vice presidential candidates highlighted the toughest challenge for the Republican ticket, namely how to differentiate from Obama administration policies. The vice presidential debate left a number of questions unanswered about how each side distinguishes itself when it comes to national security.

Here's a look at a few of those issues:

How far does the Romney-Ryan doctrine extend?

U.S. Rep. Paul Ryan of Wisconsin laid out the Romney-Ryan baseline for using American troops. Put simply, it is when it "is in the national interests of the American people."

That's a broad doctrine, but Ryan did give some sense of how it would apply.


For one thing, he said it does not preclude "embargoes and sanctions and overflights, those are things that don't put American troops on the ground."

But there has not been enough discussion to ferret out how what differentiates the Republicans from the Democrats.

With Syria, the stance is no different than Obama and Biden either.

"Nobody is proposing to send troops to Syria. American troops," Ryan said.

How this doctrine extends to other scenarios remains unclear. Asked whether humanitarian issues would merit American troops under this definition, Ryan suggested it would be given the same consideration of needing to be "in the national interests of the American people."

But what about going into Pakistan if necessary to fight the Taliban shooting at American troops? What does Romney-Ryan think of using troops, as Obama has, as advisers to help chase down Ugandan warlord Joseph Kony in Africa? Or massing a relief effort after an earthquake in Indonesia, for example?

Who is to blame on Benghazi?

There's no question that the administration's handling of the aftermath of the deadly attack on the U.S. Consulate in Benghazi has put the Obama-Biden ticket on its heels. Biden's debate performance opened the door to further accusations that the White House was looking to blame the State Department and intelligence community rather than itself.

Much attention was given to Biden suggesting that the administration did not know of any requests for additional security, seemingly contradicting testimony of State Department staff earlier in the week who had told Congress of receiving numerous requests made for additional security. The next day, spokesman Jay Carney sought to explain that the vice president meant that the White House itself was not aware of requests for such security changes since that is something that was handled within the State Department.

But Biden also defended against accusations that the Oval Office clung too long to the theory that the attack grew spontaneously from a protest over an anti-Muslim video.

Where does the buck stop for the president then?

"It seems to me that you should take a look at his most important responsibility. That's caring for the national security of the country. And the best way to do that is take a look at how he's handled the issues of the day," Biden said.

Of course, with three investigations just started -- an FBI criminal investigation, as well as a congressional and a State Department investigation -- the answer of who is responsible is going to take time to resolve. But Obama may have to answer where his responsibility is in this matter.

What exactly is the Romney-Ryan plan for defense spending?

Ryan left his presidential partner with some explaining to do about what exactly is the anticipated cost of increasing defense spending, as the Republican ticket is proposing to do.

The strategy is perhaps one of the most striking national security differences between the two sides.

Obama has already announced close to $500 billion in defense cuts as a way to help balance the budget. Romney and Ryan never miss a chance to blame the president for another $500 billion in impending defense cuts under the deal reached with Congress should deficit reduction measures not be reached. Never mind that is a plan to which Republicans themselves agreed.

But the Romney-Ryan plan calls for defense spending at 4% of GDP, which would lead to an increase of $2.1 trillion in defense spending over 10 years, according to an estimate done earlier this year for CNNMoney. But when Biden yielded that figure last week, Ryan said that was not the plan.

But Ryan never explained what the increase would add up to. Romney may have to do that math for America.

Could the longest war go even longer than planned?

The president's plan has U.S. combat troops scheduled to be out of Afghanistan by the end of 2014.

"We will leave in 2014," he said. He did not mention the intention to maintain an estimated 10,000 to 15,000 troops in Afghanistan to help with any further training, advising and, if needed, to deal with threats to America's own interests, though not by definition for combat.

Ryan left open the door for troops staying beyond that date, though the Republican ticket agrees with the 2014 transition date.

Raddatz: You're saying that's not an absolute, but you won't talk about what conditions would justify ...

Ryan: Do you know why we say that?

Ryan: Because we don't want to broadcast to our enemies "put a date on your calendar, wait us out, and then come back." We want to make sure ...

The day after the debate, however, Ryan's spokesman Brendan Buck told CNN that the candidates are committed to the same 2014 transition date as Obama but "believe troop withdrawals within that time frame should be directed by the advice of commanders."

So that leaves some confusion about the Romney-Ryan stance.

Of course, any decision to stay beyond 2014 is not just up to the U.S. It is a matter that would need to be renegotiated with Afghanistan. In addition, the idea that combat could continue might not sit well with a war-weary nation and a military community that already has a 2014 goal post in front of them.