Convicted Murderer with Iq of 61 Executed in Texas 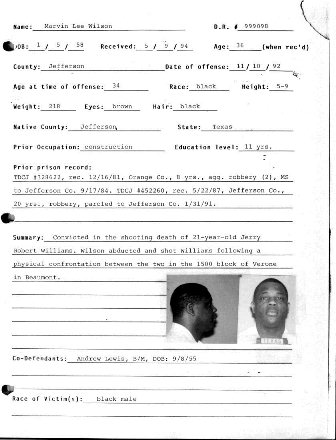 (CNN) -- A Texas man convicted in the shooting death of a 21-year-old man in 1992 was executed Tuesday in Huntsville, officials said.

Wilson's IQ had been measured at 61, according to the American Civil Liberties Union of Texas, which opposed the execution.

In an online posting, the ACLU said Wilson, 54, had been declared "intellectually disabled" by a court-appointed neuropsychologist.

"Despite all the signs of Mr. Wilson's intellectual disabilities and the diagnosis of the court-appointed neuropsychologist, the District Court of Jefferson County (Texas) concluded that Mr. Wilson is not mentally retarded," the ACLU posting said, with "not" italicized for emphasis.

Before he was put to death by lethal injuection, Wilson made a final statement in which he said, "Ya'll do understand that I came here a sinner and leaving a saint. Take me home, Jesus, take me home, Lord."

Wilson was convicted in the shooting death of Jerry Robert Williams in Beaumont, Texas. According to the Texas Department of Criminal Justice, Williams was abducted and shot after a "physical confrontation" between the two men.