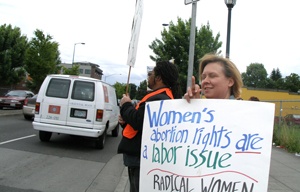 (CNN) -- A federal appeals court has temporarily blocked enforcement of an Arizona abortion law that opponents call one of the most restrictive in the country.

A three-judge panel of the 9th U.S. Circuit Court of Appeals on Wednesday put the controversial parts of the law on hold while further legal challenges proceed. The San Francisco-based court also moved the case on a judicial fast-track and said it would tackle the issue as soon as possible later this year.

Arizona HB 2036 places restrictions on and would criminalize most abortions performed after 20 weeks of pregnancy. The law has narrow exceptions for medical emergencies involving the pregnant woman.

The law was scheduled to go into effect Thursday, and a federal judge in Phoenix earlier this week had allowed it to go into effect. That prompted an emergency request for "injunctive relief" to the appeals court by the American Civil Liberties Union and the Center for Reproductive Rights, on behalf of three patients and their physicians.

Other states permit some second-trimester and post-viability abortions, and allow for exceptions when the expectant mother's life or health would be in danger. There is no clear medical or legal standard to determine when a pregnancy would be considered "later term."

The Arizona ban would also apply to women who have been informed the fetus would not survive after birth.

"We are relieved that the court blocked this dangerous ban and that women in Arizona will continue to be able to get safe, appropriate medical care," said Alexa Kolbi-Molinas with the ACLU Reproductive Freedom Project. "Abortion is a serious, personal decision that should be made by a woman, her family and her doctor -- not by politicians."

There was no immediate reaction to the court's injunction from the state's governor or the law's legislative supporters.

Many Arizona state prosecutors, who would have enforced the law, were at odds on whether the law should be put on hold until its constitutionality was ultimately determined in the courts.

Arizona is among 10 states to pass laws with 20-week abortion bans, according to court records. A current Arizona measure blocks the medical procedure at viability -- generally about 20-24 weeks when the fetus might be able to survive outside the womb.