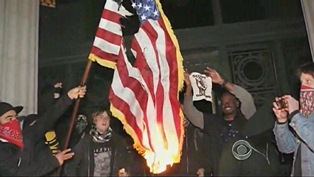 OAKLAND, Calif. (AP) -- It started peacefully enough: A midday rally at City Hall and a march. But as the day wore on, Oakland was hit by the most turbulent protests in weeks as Occupy demonstrators clashed repeatedly with police, leaving more than 400 people arrested.

The demonstrations in downtown Oakland broke a lull that had seen just a smattering of people taking to Oakland's streets in recent weeks for occasional marches that bore little resemblance to the headline-grabbing Occupy demonstrations of last fall.

That all changed Saturday with clashes punctuated by rock and bottle throwing by protesters and volleys of tear gas from police, and a City Hall break-in that left glass cases smashed, graffiti spray-painted on walls and an American flag burned.

AP photos showing the flag burning - including images of masked protesters touching off the blaze, a woman urging protesters not to burn it, and another of an officer stomping out the fire - drew attention on social networking sites.

At least three officers and one protester were injured. Police spokesman Sgt. Jeff Thomason said there were more than 400 arrests on charges ranging from failure to disperse to vandalism,

On Sunday, Oakland officials vowed to be ready if Occupy protesters try to mount another large-scale demonstration. Protesters, meanwhile, decried Saturday's police tactics as illegal and threatened to sue.

Mayor Jean Quan personally inspected damage caused by dozens of people who broke into City Hall, which reopened Monday. She said she wants a court order to keep Occupy protesters who have been arrested several times out of Oakland, which has been hit repeatedly by demonstrations that have cost the financially troubled city about $5 million.

Quan also called on the loosely organized movement to "stop using Oakland as its playground."

"People in the community and people in the Occupy movement have to stop making excuses for this behavior," she said.

Saturday's protests - the most convulsive since Oakland police forcefully dismantled an Occupy encampment in November - came just days after the announcement of a new round of actions. The group said it planned to use a vacant building as a social center and political hub and threatened to try to shut down the Port of Oakland for a third time, occupy the airport and take over City Hall.

After the mass arrests, the Occupy Oakland Media Committee criticized the police's conduct, saying that most of the arrests were made illegally because police failed to allow protesters to disperse. It threatened legal action.

"Contrary to their own policy, the OPD gave no option of leaving or instruction on how to depart. These arrests are completely illegal, and this will probably result in another class action lawsuit against the OPD," a release from the group said.

Earlier this month, a court-appointed monitor submitted a report to a federal judge that included "serious concerns" about the department's handling of the Occupy protests. Police officials say they were in "close contact" with the federal monitor during the protests.

The national Occupy Wall Street movement, which denounces corporate excess and economic inequality, began in New York City in the fall but has been largely dormant lately. Oakland, New York and Los Angeles were among the cities with the largest and most vocal Occupy protests early on. The demonstrations ebbed after those cities used force to move out hundreds of demonstrators who had set up tent cities.

"The Occupy movement is back on the map," Manning said Sunday. "We think those who have been involved in movements elsewhere should be heartened."

In Oakland, social activism and civic unrest have long marked this rough-edged city of nearly 400,000 across the bay from San Francisco. Beset by poverty, crime and a decades-long tense relationship between the police and the community, its streets have seen clashes between officers and protesters, including anti-draft protests in the 1960s that spilled into town from neighboring Berkeley.

Dozens of officers, who maintained guard at City Hall overnight, were also on the scene Sunday.

"They were never able to occupy a building outside of City Hall," Interim Police Chief Howard Jordan said Sunday. "We suspect they will try to go to the convention center again. They will not get in."

Jordan defended his officers' response to the protesters on Saturday.

"No we have not changed our tactics," Jordan said. "The demonstrators have changed their tactics, which forces us to respond differently."

Quan, who faces two mayoral recall attempts, has been criticized for past police tear-gassing, though she said she was not aware of the plans. On Saturday, she thought the police response was measured.

She also said she hopes prosecutors will seek a stay-away order against protesters who have been arrested multiple times.

"It appears that most of them constantly come from outside of Oakland," Quan said. "I think a lot of the young people who come to these demonstrations think they're being revolutionary when they're really hurting the people they claim that they are representing."

Saturday's events began when a group assembled outside City Hall and marched through the streets, disrupting traffic as they threatened to take over a vacant convention center.

The protesters then walked to the convention center, where some started tearing down perimeter fencing and "destroying construction equipment" shortly before 3 p.m., police said. The number of demonstrators swelled as the day wore on, with afternoon estimates ranging up to 2,000 people, although city leaders say that figure was much closer to several hundred.

A majority of the arrests came after police took scores of protesters into custody as they marched through downtown, with some entering a YMCA building, Thomason said.

One of those taken into custody at the facility was KGO radio reporter Kristin Hanes.

Though she was released after about 25 minutes, Hanes said she was "angry that they put a reporter in zip-tie handcuffs."

Oakland police didn't immediately respond to a request for comment about her arrest.