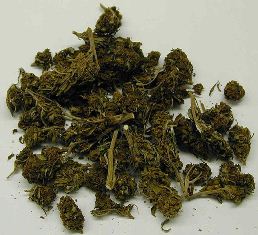 SAN FRANCISCO (AP) -- A quarter-century after the U.S. Food and Drug Administration approved the first prescription drugs based on the main psychoactive ingredient in marijuana, additional medicines derived from or inspired by the cannabis plant itself could soon be making their way to pharmacy shelves, according to drug companies, small biotech firms and university scientists.

A British company, GW Pharma, is in advanced clinical trials for the world's first pharmaceutical developed from raw marijuana instead of synthetic equivalents- a mouth spray it hopes to market in the U.S. as a treatment for cancer pain. And it hopes to see FDA approval by the end of 2013.

FDA approval would represent an important milestone in the nation's often uneasy relationship with marijuana, which 16 states and the District of Columbia already allow residents to use legally with doctors' recommendations. The U.S. Drug Enforcement Administration categorizes pot as a dangerous drug with no medical value, but the availability of a chemically similar prescription drug could increase pressure on the federal government to revisit its position and encourage other drug companies to follow in GW Pharma's footsteps.

"There is a real disconnect between what the public seems to be demanding and what the states have pushed for and what the market is providing," said Aron Lichtman, a Virginia Commonwealth University pharmacology professor and president of the International Cannabinoid Research Society. "It seems to me a company with a great deal of vision would say, `If there is this demand and need, we could develop a drug that will help people and we will make a lot of money.'"

Possessing marijuana still is illegal in the United Kingdom, but about a decade ago GW Pharma's founder, Dr. Geoffrey Guy, received permission to grow it to develop a prescription drug. Guy proposed the idea at a scientific conference that heard anecdotal evidence that pot provides relief to multiple sclerosis patients, and the British government welcomed it as a potential way "to draw a clear line between recreational and medicinal use," company spokesman Mark Rogerson said.

In addition to exploring new applications for Sativex, the company is developing drugs with different cannabis formulations.

"We were the first ones to charge forward and a lot of people were watching to see what happened to us," Rogerson said. "I think we are clearly past that stage."

In 1985, the FDA approved two drug capsules containing synthetic THC, Marinol and Cesamet, to ease side-effects of chemotherapy in cancer patients. The agency eventually allowed Marinol to be prescribed to stimulate the appetites of AIDS patients. The drug's patent expired last year, and other U.S. companies have been developing formulations that could be administered through dissolving pills, creams and skin patches and perhaps be used for other ailments.

Doctors and multiple sclerosis patients are cautiously optimistic about Sativex. The National Multiple Sclerosis Society has not endorsed marijuana use by patients, but the organization is sponsoring a study by a University of California, Davis neurologist to determine how smoking marijuana compares to Marinol in addressing painful muscle spasms.

"The cannabinoids and marijuana will, eventually, likely be part of the clinician's armamentarium, if they are shown to be clinically beneficial," said Timothy Coetzee, the society's chief research officer. "The big unknown in my mind is whether they are clearly beneficial."

Opponents and supporters of crude marijuana's effectiveness generally agree that more research is needed. And marijuana advocates fear that the government will use any new prescription products to justify a continued prohibition on marijuana use. .

"To the extent that companies can produce effective medication that utilizes the components of the plant, that's great. But that should not be the exclusive access for people who want to be able to use medical marijuana," Americans for Safe Access spokesman Kris Hermes said. "That's the race against time, in terms of how quickly can we put pressure on the federal government to recognize the plant has medical use versus the government coming out with the magic bullet pharmaceutical pill."

Interest in new and better marijuana-based medicines has been building since the discovery in the late 1980s and 1990s that mammals have receptors in their central nervous systems, several organs and immune systems for the chemicals in botanical cannabis and that their bodies also produce natural cannabinoids that work on the same receptors.

One of the first drugs to build on those breakthroughs was an anti-obesity medication that blocked the same chemical receptors that trigger the munchies in pot smokers. Under the name Acomplia, it was approved throughout Europe and heralded as a possible new treatment for smoking cessation and metabolic disorders that can lead to heart attacks.

The FDA was reviewing its safety as a diet drug when follow-up studies showed that people taking the drug were at heightened risk of suicide and other psychiatric disorders. French manufacturer Sanofi-Aventis, pulled it from the market in late 2008.

Given that drug companies already were reluctant "to touch anything that is THC-like with a 10-foot- pole," the setback had a chilling effect on cannabinoid drug development, according to Lichtman.

"Big companies like Merck and Pfizer were developing their own versions (of Acomplia), so all of those programs they spent millions and millions on just went away..." he said.

But scientists and drug companies that are exploring pot's promise predict the path will ultimately be successful, if long and littered with setbacks.

One is Alexandros Makriyannis, director of the Center for Drug Discovery at Northeastern University and founder of a small Boston company that hopes to market synthetic pain products that are chemically unrelated to marijuana, but work similarly on the body or inhibit the cannabinoid receptors. He also has been working on a compound that functions like the failed Acomplia but without the depressive effects.

"I think within five to 10 years, we should get something," Makriyannis said.