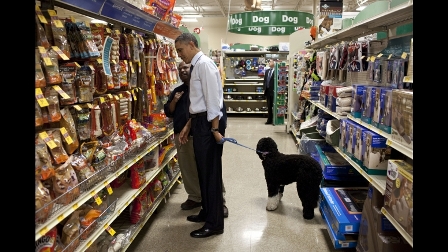 WASHINGTON (AP) -- For all his problems with the economy, President Barack Obama is getting unexpected help from a Republican Party that seems incapable of capitalizing on its advantages.

Congressional Republicans' fumbling of the payroll tax issue is the latest example of party in-fighting and disarray that gives Democrats hope for the 2012 elections. GOP presidential contenders have tried to distance themselves from the legislative mess. But they might be tarred nonetheless if swing voters decide the party is either inept at governing or too extreme.

The eventual GOP presidential nominee "will be somewhat shackled to the Republican brand," said Democratic strategist Erik Smith, even if congressional Republicans are the ones leading the charge in an unpopular fight over the payroll tax. He said GOP House and Senate candidates will face even more problems.

The Wall Street Journal editorial page - an important voice among conservatives - berated Republican lawmakers for their handling of the payroll tax matter. Obama wants to add another year to this year's reduction in the tax, which nearly all workers pay toward Social Security. Senate Republicans, after forcing Democrats to swallow several unrelated concessions, joined in an overwhelmingly bipartisan vote to approve only a two-month tax cut extension, with plans to revisit the issue next year.

But House Republicans, who generally disliked the payroll tax cut from the start, refused to concur. Unless something changes in the next 10 days, the payroll tax rate will return to 6.2 percent on Jan. 1, after one year at 4.2 percent. That would cost a family making $50,000 about $1,000.

Republican congressional leaders' actions "might end up re-electing the president before the 2012 campaign even begins in earnest," the Journal's editorial page said Wednesday.

Democrats allege that congressional Republicans are essentially controlled by tea party activists whose tax and spending agendas are outside the political mainstream.

Democratic strategists hope to remind voters of last summer's near-calamity over raising the limit on the debt ceiling. Then, as now, House Speaker John Boehner struggled to control his GOP caucus and to calculate which bills can and cannot pass. These Democrats want to paint the Republican Party as an out-of-touch institution that would rather stand for rigidly conservative principles than solve the nation's problems.

"I think the tea party-engendered dysfunction has the potential to really get the electorate's attention," said Jared Bernstein, a former Obama administration economist now with the Center on Budget and Policy Priorities. "At this point, the system is crippled by them."

All of this, of course, may be wishful thinking by Democrats. Republicans crushed them in the 2010 elections, giving the GOP control of the House and many governorships. Unemployment and other economic indicators bode badly for Obama's re-election hopes, and the payroll tax fuss may seem a musty memory by next November.

One other worry looms. If the payroll tax impasse remains unresolved, working Americans' taxes will rise by billions of dollars next year. Economists say that would depress spending and slow job growth, at least somewhat. Even if more voters blame Republicans than Democrats, Obama could end up as a net loser politically, given that the economic climate already is deeply troublesome for him. Also, unemployment benefits will be curbed if the legislative package remains stalled.

Analysts in both parties question whether Republicans will take such a risk.

"I think the likely scenario is some kind of bill passes in January, probably with retroactive benefits," Bernstein said. "It's a real pain for businesses," he said, because they would have to adjust their employees' tax withholding programs yet again.

Such an outcome, however, might help Obama and other Democrats politically. Restoration of the lower payroll tax rate would hold the economy harmless. But independent voters might think Republican lawmakers sought to raise their taxes. And hard-core conservative voters might blame those same lawmakers for surrendering to a tax cut they dislike.

The payroll tax impasse seems to have cost Republicans another political victory. In House-Senate negotiations, they forced Obama to agree to an expedited decision on a proposed transcontinental oil pipeline opposed by environmental groups. But it was included in the Senate-passed package with the two-month tax extension. Republicans who gloated over Obama's concession on the pipeline now have nothing to show for their efforts.

A recent poll by the Pew Research Center found that a record-high 50 percent of Americans say the current Congress is less effective than most. By nearly 2-to-1, "more blame Republican leaders than Democratic leaders for this," Pew found. "By wide margins, the GOP is seen as the party that is more extreme in its positions, less willing to work with the other side to get things done, and less honest and ethical in the way it governs. And for the first time in over two years, the Democratic Party has gained the edge as the party better able to manage the federal government."

Such findings may add pressure on Boehner and other Republican leaders to find a way out of the payroll tax cut dilemma.