Ethnic Media: Where Do Immigrants Stand on Occupy? 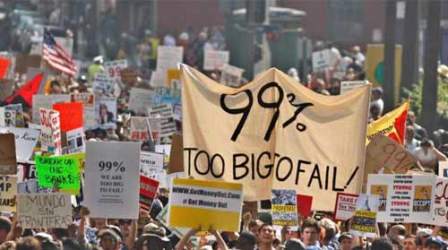 Editor's note: California ethnic media weigh in on the meaning and impact of the Occupy movement on their communities. Some say the protests have caused civic chaos and economic hardships for immigrant small business owners, while others feel the movement has done much to spur greater dialogue on issues of class and poverty.

SAN FRANCISCO -- Although immigrants have not had a very strong presence in the Occupy movement, one man -- Francisco "Pancho" Ramos Stierle – captivated the attention of Latino media across the country.

The 36-year-old was arrested last month as part of the Occupy Oakland protest and faced possible deportation as a result of his immigration status.

Ramos has since been set free, and will appear before an immigration judge at a future date.

A reporter for El Mensajero saw the activist protesting near the Port of Oakland on Monday. "That to me says that of course he's risking deportation, but he is standing for the movement," María Mejía, editor of Spanish-language newspaper El Mensajero in San Francisco, told NAM.

Even though the three-month-old Occupy movement in the United States began on Wall Street as a protest by the so-called "99 percent" against the greed and corruption of the "1 percent," many in immigrant communities view the diffused and amorphous protests as something that has already begun to hurt blue-collar workers and the economy, according to reports in the ethnic media.

For example, each day that there are delays and disruptions in operations at the Port of Oakland, the region loses approximately $8.5 million in lost wages and state taxes, as well as in business revenue related to imports and exports, according to Robert Bernardo, a spokesman for the Port of Oakland.

Valerie Lapin, spokeswoman for the Oakland-based Coalition for Clean and Safe Ports, told India-West, a San Leandro, Calif.-based weekly newspaper for the South Asian diaspora in the United States, "Truck drivers are definitely part of the 99 percent. They are such a clear example of those who are being exploited."

Indian Americans, most of them from Punjab, make up roughly one-third of all truck owners and drivers in California. Nearly all of them are in business for themselves, which means they get no health insurance, have to pay for truck fuel, maintenance and registration, making no more than $25,000 a year.

Several Indian-American owners of trucking companies who operate out of the Oakland ports expressed their displeasure over the two-day protest, according to India-West.

"I didn't cross the picket line because I didn't know what was going to happen," Rajiv Jain, owner of Bridgeport Transporting and Warehousing, told the paper.

"My drivers were intimidated by the protestors. We don't support them at all," asserted Jain, noting that at a similar occurrence in November, protestors threw rocks at the trucks, shattering windshields that had to be replaced by the drivers who own their own trucks.

Dong Kim, publisher of Hyundai News, an Oakland-based Korean-language weekly, said he sympathizes with the protestors' cause, and while it has helped to shine a spotlight on the greed of the 1 percent, he is opposed to "their most recent actions, including the port shutdown" as it has paralyzed the city.

Henrik Rehbinder, editorial page editor of La Opinión in Los Angeles, which has written several editorials on Occupy L.A., echoed Kim's view: "We support the intentions (behind the movement); we don't necessarily agree with the methods," he said.

The paper has been critical of the violence used by both the protestors and police.

In order for the movement to be successful, Rehbinder said, it needs to tailor the message, focus on economic inequality, and develop clearer leadership. "We think the purpose of the whole thing, is eventually to occupy the ballot box."

Chinatown businesses in Oakland worried, according to the World Journal, one of the largest Chinese-language newspapers in the United States, that the shutdown would delay the unloading of their goods and affect their sales in the days before the Lunar New Year that arrives Jan. 23 next year.

Oakland Chinatown Neighborhood Crime Prevention Council president Carl Chan said the shutdown of the Oakland Port has diverted cargo ships to ports in Los Angeles and other cities. That's forcing many businesses to have to pay for transferring the cargo to the Bay Area. Small business owners belonging to the 99 percent are financially hurt.

Still, some ethnic media say the Occupy movement has captured the imagination of readers, and brought the issues of class, the wealth gap and poverty to the forefront of public debate.

Giao Pham, managing editor of Nguoi Viet based in Westminster, Calif., said his Vietnamese daily continues to track the Occupy movement, because there's interest in the community.

"People recognize that the movement is getting bigger and they discuss the meaning of the movement," he said. "The Vietnamese community here in the U.S., we're new and not rich. People discuss the one percent and the 99 percent, which they belong to."

In an editorial, Ngo Nhan Dung, who chairs the newspaper's editorial board, offers an Occupy movement 101, and explains how the movement should be perceived.

Ngo says that the movement was initiated by young people, demanding a fairer society, and should not be perceived as a movement to overthrow the government or to get rid of capitalism, according to the newspaper's managing editor Pham. The op-ed argues we should not blame financial brokers or investors for the gap in income. It is, instead, the tax law that should be changed in order to narrow the gap, according to Pham.

"The middle-class and lower-class communities are hurting and they have every right to make sure their voices are heard," she said. "Low-income earners and people who earn $1 million a year should not be taxed the same. It is not right to have so few people with so much wealth, while there are so many who do not have enough to eat."

Blogger Linda Evans, who will be joining the Occupy movement in Washington, D.C., this weekend, writes for MomsRising.org.

"I haven't felt this energized since the civil rights movement and women's march in the 1960s," she writes.

The unemployment rate in Washington, D.C. is 11 percent, significantly higher than the national average, she notes.

"I know how hard it is to find work here as I am currently looking for work. My two sons recently found jobs after two years of looking for work. Cutting off the unemployed from unemployment insurance will mean more overdue bills, more foreclosed homes and a loss of dignity for our residents."

Evans, who is African American, argues that, "What is happening today goes beyond issues of race and gender. We, and by that I mean all Americans, have helped build this country." She writes, "Now our humanity is under attack as we face the worst recession in recent history and a host of problems associated with it: joblessness, home foreclosures, poverty and a lack of dignity."