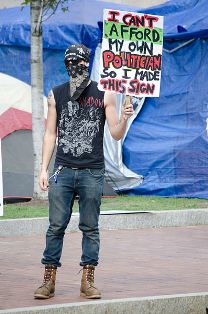 BOSTON (AP) -- A diminished Occupy Boston encampment held its ground early Friday after police decided not to immediately enforce a midnight deadline that the mayor had set for them to leave a city square.

Two protesters were arrested after police said they moved a tent into a street and refused to move, blocking traffic. But there were no other serious confrontations between the demonstrators and supporters who gathered at the site as the deadline loomed.

Boston police Supt. William Evans told protesters that even though Mayor Thomas Menino set the deadline, he did not specify when the camp would be shut down.

"We're continuing to work with (the protesters)... and hopefully come to a good conclusion where we don't have any confrontations and there are no arrests," Evans told reporters.

Many protesters had pulled up stakes and left the encampment Thursday after learning of the deadline, but others stayed, and some said they were prepared to be arrested.

"I have no intention of leaving," said 20-year-old Brandon Cloran, of Lynn, who has lived at the camp for the past six weeks.

"No one here will give up," Cloran said Friday morning.

The encampment site in Dewey Square in the city's financial district looked noticeably smaller Friday than it had since the protesters first began occupying the site on Sept. 30. Only about 40 protesters and 35 tents remained, covering less than half the area the protest once did.

The remaining protesters said they were not deterred by the smaller presence. Mike Hipson, 19, of Framingham, said he expects some protesters who went to Washington, D.C., this week to return Friday afternoon. He said the group has no immediate plans to leave.

Around the protesters, a police officer removed metal barriers while a public works crew loaded wood, lawn chairs, plastic covers and other items onto a recycling truck.

During a visit to the site at about 8 a.m. Friday, Boston Police Commissioner Edward Davis wouldn't say what the city plans to do about the remaining protesters.

Demonstrators and their supporters began gathering in the hours before the midnight deadline. Occupy groups from Worcester and Providence, R.I., helped swell the ranks, along with university students, a group of Quakers and some veterans, including a Marine in full dress uniform.

About 1,000 people filled the streets around the financial district and a party-like atmosphere reigned as a marching band played and people sang and danced.

As midnight approached, Occupy Boston members began organizing those demonstrators willing to be arrested, telling them to stay in the encampment and link arms.

After protesters chanted "We are the 99 percent" and singing "Solidarity Forever" for several minutes, the band began playing again for the crowd.

Hours later, as dawn approached, the scene was markedly quieter, with only a handful of police officers keeping eye on the remaining protesters, a few of whom were still packing up tents and gathering belongings. One protester was raking part of the greenway that had been vacated by other members of the movement.

While Menino had previously said the city had no plans to forcibly remove the encampment, he appeared to become increasingly impatient with the protesters in recent days, saying the occupation has become a public health and safety hazard. He issued his ultimatum after a judge ruled on Wednesday that the protesters had no right to stay in Dewey Square.

Protesters estimate that 100 to 150 activists live in the Boston encampment.

"I think that the mayor used silence as a tactic to win the court case. He never said anything, and during radio interviews, he said, `I'm not saying they have to go, I'm just saying that we want the ability to ask them to go,'" said John Ford, a 30-year-old bookstore owner from Plymouth and a member of the encampment. "Now they want to flip us immediately."

The American Civil Liberties Union of Massachusetts and the National Lawyers Guild-Massachusetts issued a joint statement calling on the city and police to refrain from "heavy-handed crackdowns" if they decide to remove protesters.

Suffolk Superior Court Judge Frances McIntyre dealt Occupy Boston a major setback Wednesday when she lifted a temporary restraining order that blocked the city from removing protesters. McIntyre said that while the protesters are exercising their rights to freedom of expression from government interference, the occupation of state land is essentially viewed "as a hostile act" that is neither speech "nor is it immune from criminal prosecution for trespass or other crimes."

Lawyers representing Occupy Boston indicated that they would appeal, but they didn't move immediately to seek a stay of McIntyre's ruling.