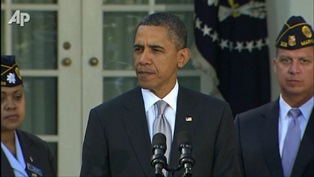 "Our veterans did their jobs. It's time for Congress to do theirs. It's time for them to put country before party," Obama said in the Rose Garden, flanked by leaders of veterans' groups.

Ahead of Veterans' Day, Obama pressed lawmakers to approve tax credits for businesses to hire unemployed veterans or injured veterans who have been out of work. The Senate is expected to consider the measures this week.

The actions are part of a larger effort by the White House to draw contrasts with congressional Republicans who have opposed Obama's jobs legislation a year before the 2012 election. Obama has signed executive orders aimed at spurring job growth and helping homeowners and college students in recent weeks, saying he does not want to wait for Congress to act.

Obama said the administration would act unilaterally to help veterans match their skills to job openings and access job banks. He said veterans could download a "Veteran Gold Card" issued by the Labor Department that allows former military members to get six months of personalized case management, assessment and counseling at career centers.

The White House estimates the gold card could help more than 200,000 unemployed veterans who served after the Sept. 11, 2001, terrorist attacks.

"Just as you fought for us we are going to keep fighting for you," Obama said.

The Senate is expected to take up the tax credits in combination with a measure to repeal a proposed requirement to withhold 3 percent of payments to federal, state and some local government contractors with unpaid taxes.

The tax incentives cleared the House last month and are not expected to be paid for through Obama's proposed tax on millionaires, raising hopes that could win Republican support.

Obama noted that when he proposed the tax incentives for veterans during his jobs speech before Congress, lawmakers from both sides stood and applauded. "I expect both sides of the aisle to stand up for our veterans and vote in the affirmative," he said.

Soldiers returning home from Iraq and Afghanistan face a challenging job market. The Labor Department estimated that 12.1 percent of veterans who served in the military since 9/11 were unemployed in October, higher than the national rate of 9 percent.

With American soldiers leaving Iraq and Afghanistan, about 1 million service members are expected to depart the military by 2016 and enter the job market. Advocates for veterans say many returning soldiers struggle to translate their skills into the civilian work force and some companies are reluctant to hire veterans due to fears about mental health issues.

"Without using every option available to assist them, unemployment for veterans will only rise with the drawdown of troops in Iraq and Afghanistan," said Bob Wallace, executive director of the Veterans of Foreign Wars of the United States.