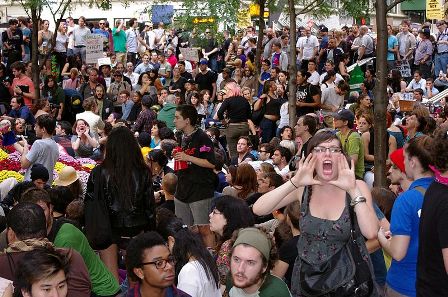 NEW YORK (AP) -- Fed up with petty crime, the all-night racket of beating drums, the smell of human waste and the sight of trampled flowers and grass, police and neighbors are losing patience with some of the anti-Wall Street protests around the U.S.

In Oakland, Calif., police in riot gear fired tear gas and bean bags before daybreak Tuesday to disperse about 170 protesters who had been camping in front of City Hall for the past two weeks, and 75 people were arrested.

The mayor of Providence, R.I., is threatening to go to court within days to evict demonstrators from a park.

And businesses and residents near New York's Zuccotti Park, the unofficial headquarters of the movement that began in mid-September, are demanding something be done to discourage the hundreds of protesters from urinating in the street and making noise at all hours.

"A lot of tourists coming down from hotels are so disgusted and disappointed when they see this," said Stacey Tzortzatos, manager of a sandwich shop near Zuccotti Park. "I hope for the sake of the city the mayor does close this down."

She complained that the protesters who come in by the dozen to use her bathroom dislodged a sink and caused a flood, and that police barricades are preventing her normal lunch crowd from stopping by.

In Philadelphia, city officials have been waiting almost two weeks for Occupy Philly to respond to a letter containing a list of health and safety concerns. City Managing Director Richard Negrin said officials can't wait much longer to address hazards such as smoking in tightly packed tents, camp layouts that hinder emergency access, and exposure to human waste.

"They just can't ignore us indefinitely," Negrin said Tuesday. "Every day that they haven't addressed these public safety concerns simply increases the risk."

Stephen Campbell, a protester in Boston, said the troublemakers are the minority.

"We have a policy here: no drugs, no alcohol," he said. "Us occupiers really try to stick true to that. Other people who move in, who maybe have an alcohol problem or a drug problem, you know, we're not fully equipped to handle things like that."

City officials in Oakland had initially been supportive of the protesters, with Mayor Jean Quan saying that sometimes "democracy is messy." But tensions reached a boiling point after a sexual assault, a severe beating and a fire were reported and paramedics were denied access to the camp, according to city officials. They also cited complaints about threatening behavior and concerns about rats, fire hazards and public urination.

When police moved in, they were pelted with rocks, bottles and utensils from people in the camp's kitchen area, but no injuries were reported. Protesters were taken away in plastic handcuffs, most of them arrested on suspicion of illegal lodging.

Protesters disputed the city's claims about conditions at the camp. Lauren Richardson, a college student from Oakland, said that volunteers collected garbage and recycling every six hours, that water was boiled before being used to wash dishes, and that rats had infested the park long before the camp went up.

In New York, the neighborhood board scheduled a meeting Tuesday night to vote on a resolution that proposed off-site portable bathrooms funded by local donors, said Julie Menin, head of the board. The resolution also requested that loud noises, like the blast of air horns and group chanting, be limited to two hours during the day.

"Drumming has been going on late at night," she said.

The park's owner, Brookfield Office Properties, tried to push the protesters out two weeks ago to clean it but backed off at the last minute after a public outcry.

Menin said the neighborhood does not believe the protesters should be kicked out. "We do not want the city to use force in any way," she said. "And we think it's possible to address quality-of-life issues."

In Minneapolis, Hennepin County Commissioner Jeff Johnson said some constituents who work downtown are getting a little tired of the piles of belongings cluttering the plaza, while others are worried about escalating costs. The sheriff's department has already spent more than $200,000, most of that in overtime. About 100 to 150 demonstrators crowd the plaza during the day.

"I think most people I talk to are either supportive or understanding of people's right to say what they want and hold a protest or a rally, but when you start looking at the costs and how this is stringing out, it is wearing on some people's patience," Johnson said. "At first it looked like they were having a rally or trying to make a statement, but now it just looks like a game to them. Most people don't support that."

Fariyal Lakhani, owner of a kiosk next to an Atlanta park where a few dozen protesters have camped out, said people aren't buying candy bars and sodas, or they want things for free or at a steep discount.

A 7-Eleven one block from the protests in Portland, Ore., reported a higher-than-normal $6,000 in shoplifting since the protest began Oct. 6. The store has added a security guard.

In Providence, Public Safety Commissioner Steven Pare initially said he would give the activists two or three days to remain in Burnside Park without a permit. But Monday night marked the 10th night of the encampment, now consisting of more than 100 tents. City officials said the grass is getting damaged, and they want to close the restrooms and prepare the park for winter.

In Washington, protesters in McPherson Square and Freedom Plaza appear to be getting along with the police and the neighbors.

One activist, Wes Kirkpatrick, said he believes the demonstration in McPherson Square is benefiting from its location just blocks from the White House, and he does not expect the federal government to crack down. "It would be hypocritical for Obama to do anything because he legitimized our grievances publicly," he said.

McPherson Square is surrounded by banks, restaurants, law firms and other businesses. Ayanna Brown, general manager of the popular restaurant Georgia Brown's, said the protesters don't even come in and ask to use the restroom. And Patrick Segui, who owns a hair salon at McPherson Square, said his business hasn't suffered.

"As far as protesting, that's the way to do it. They're very clean," Segui said. "Politically, it's a different story, but we don't need to go there."