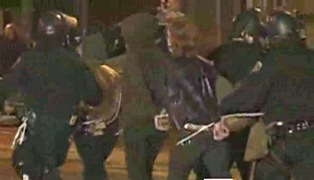 OAKLAND, Calif. (AP) -- Police in riot gear cleared anti-Wall Street protesters on Tuesday morning from the plaza in front of Oakland's City Hall where they had been camping for about two weeks, prompting health and safety concerns among city officials.

Seventy-five people were arrested, mostly on suspicion of misdemeanor illegal lodging, as hundreds of officers and sheriff's deputies from more than a dozen agencies went into the encampment with tear gas and beanbag rounds around 5 a.m., police said

About 170 protesters were at the site, but no one was injured, according to police.

Television news footage showed protesters being taken away in plastic handcuffs without incident.

One of those arrested, Aiyahnna Johnson, 30, of Oakland, had been living at the camp with her 2-year-old daughter. "We want the best for you guys, that's all," she was quoted by the San Francisco Chronicle telling two officers who were leading her away.

The Oakland site was among numerous camps that have sprung up around the country, as protesters rally against what they see as corporate greed and a wide range of other economic issues. The protests have attracted a wide range of people, including college students looking for work and the homeless.

The police action in Oakland began around 4:40 a.m. when an officer on a loud speaker told the protesters they were illegally blocking the plaza and were subject to arrest, according to the Chronicle. The newspaper reported that several hundred people appeared ready to defend the camp about an hour before police moved in, placing Dumpsters, boards, pallets and even metal police-style barricades around the plaza.

Anthony Owens, 40, of Oakland, said some people in the camp left as word spread about possible police action. The remaining protesters locked arms and shouted as officers moved in from four corners, Owens said.

Jordan said authorities fired tear gas after being pelted with rocks, bottles and utensils from people in the camp's kitchen area. The person shot with a beanbag was reaching into a trashcan to pick up bottles, he said.

Witnesses reported seeing smoke rising from the area. The plaza was "contained" around 5:30 a.m., according to city officials, although tents and trash remained strewn there.

Police maintained a heavy presence around downtown Oakland into the morning. Streets were closed off by police barricades, and at least two helicopters were in the air shining lights down. Dozens of officers were on the streets, and police in riot gear were seen facing off with shouting protesters, who briefly blocked traffic on a busy thoroughfare.

Police also cleared a smaller encampment from a park near the plaza on Tuesday morning.

City officials had originally been supportive of the protesters, with Oakland Mayor Jean Quan saying that sometimes "democracy is messy."

But the city later warned the protesters that they were breaking the law and could not stay in the encampment overnight.

They cited concerns about rats, fire hazards, public urination and acts of violence at the site, which had grown to more than 150 tents and included health, child-care and kitchen areas.

"Many Oaklanders support the goals of the national Occupy Wall Street movement," Mayor Jean Quan said in a statement on Tuesday. "However, over the last week it was apparent that neither the demonstrators nor the City could maintain safe or sanitary conditions or control the ongoing vandalism."

There were reports of a sex assault and a severe beating and fire and paramedics were denied access to the camp, according to city officials, who said they had also received numerous complaints of intimidating and threatening behavior.

Protesters over the weekend said although there were some troublemakers in the group, the vast majority were peaceful.

Owens said the protesters plan to try to retake the plaza at some point. Asked whether they would be discouraged by the loss of the encampment, Owens said, "I think it's going to fire up people even more."