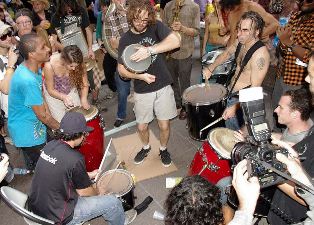 NEW YORK (AP) -- New Yorkers who live near the park where anti-Wall Street protesters have been camping out for more than a month are complaining that their quality of life has declined.

At a two-hour meeting Thursday night, some neighbors said protesters urinated in the streets and beat drums in the middle of the night.

"They're defecating on our doorsteps," said Catherine Hughes, a member of the area's community board, a representative panel that helps funnel local concerns to city officials.

Some neighbors who attended the packed meeting called for the protesters to vacate Zuccotti Park, the plaza where protesters have set up their base camp.

But the board voted unanimously for a resolution that recognized the protesters' First Amendment rights while calling for a crackdown on noise and public urination and defecation.

Asked about Occupy Wall Street on WOR Radio on Friday, Mayor Michael Bloomberg said the protesters' leaderless structure has made it difficult to negotiate with them.

But Occupy Wall Street spokesman Han Shan, who has served as a liaison between protesters and local elected officials, agreed the protesters needed to be better neighbors.

Shan, who attended Thursday's meeting, promised to limit the noise.

The community board also said it opposed the use of force by police or the park's owners to address their concerns.