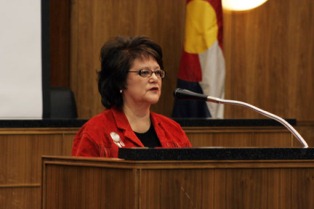 HELENA, Mont. (AP) -- Elouise Cobell, the Blackfeet woman who led a 15-year legal fight to force the U.S. government to account for more than a century of mismanaged Indian land royalties, died Sunday. She was 65.

Cobell was the lead plaintiff in a lawsuit filed in 1996 claiming the Interior Department had misspent, lost or stolen billions of dollars meant for Native American land trust account holders dating back to the 1880s.

After years of legal wrangling, the two sides in 2009 agreed to settle for $3.4 billion, the largest government class-action settlement in U.S. history. The beneficiaries are estimated to be about 500,000 people.

Asked what she wanted her legacy to be, Cobell said in a 2010 interview with The Associated Press that she hoped she would inspire a new generation of Native Americans to fight for the rights of others and lift their community out of poverty.

"Maybe one of these days, they won't even think about me. They'll just keep going and say, `This is because I did it,'" Cobell said. "I never started this case with any intentions of being a hero. I just wanted this case to give justice to people that didn't have it."

President Barack Obama released a statement that said Cobell's work provided a measure of justice to hundreds of thousands of Native Americans, will give more people access to higher education and will give tribes more control over their own lands.

"Elouise helped to strengthen the government to government relationship with Indian Country, and our thoughts and prayers are with her and her family and all those who mourn her passing," the statement read.

Cobell said she had heard stories since she was a child of how the government had shortchanged Native Americans with accounts for royalties from their land that was leased for resource development or farming.

She became outraged when she actually started digging into how much money the government had squandered that belonged people who were living in dire poverty on the Blackfeet reservation in northwestern Montana, she said.

She realized the amount mismanaged since the 1880s could be hundreds of billions of dollars. She said she tried for years working with two U.S. government administrations to resolve the dispute in the early 1990s, then decided to sue with four other Native Americans as plaintiffs when no progress was made.

The government dug in. Over the next 14 years, there were more than 3,600 court filings, 220 days of trial, 80 published court decisions and 10 appeals until the 2009 breakthrough.

Cobell spent the next year shuttling back and forth between her home in Browning to Washington, D.C., to lobby individual congressmen to approve the deal. She also logged thousands of miles traveling across Indian country to explain the deal to the potential beneficiaries.

She found unexpected resistance among some Native Americans. They questioned why it was so little, how much would be going to her and attorneys or why it didn't include a more complete accounting of what happened to the money.

Cobell discovered she had cancer just a few weeks before the judge's approval in June. She traveled to the Mayo Clinic in Rochester, Minn., for surgery.

Cobell was born with the Indian name Little Bird Woman, a great granddaughter of the famous leader Mountain Chief. She grew up with seven brothers and sisters on the Blackfeet reservation.

She was the Blackfeet nation's treasurer for 13 years, and in 1987 helped found the first U.S. bank to be owned by a tribe, the Blackfeet National Bank, which is now the Native American Bank.

She won a $300,000 "genius grant" from the John D. and Catherine T. MacArthur Foundation in 1997 and used most of the money to help fund the lawsuit.

Cobell lived on a ranch 30 miles south of Browning with her husband Alvin. Her only son, Turk, lives in Las Vegas with his wife Bobbie and their children Olivia and Gabriella.

She has a brother and two sisters who live in Browning and a third sister who lives in Seattle.