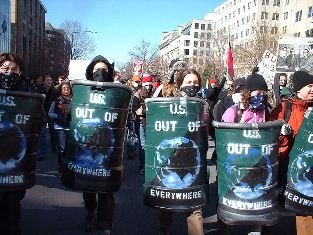 NEW HAVEN, Conn. (AP) -- David Potorti recalls his mother's pain when his brother Jim was killed in the World Trade Center. Clutching her stomach, she cried out: "Jim. Jim. Jim."

She said something else that made a lasting impression on him: "I don't want anyone else to feel the pain I'm feeling right now."

Potorti channeled that grief into becoming a peace activist, joining a group of other relatives of Sept. 11 victims who responded to the attacks by spreading that message and working to prevent others - including civilians in Iraq and Afghanistan - from enduring the same kind of suffering.

It was a daunting task in the first weeks after the hijacking plot that killed nearly 3,000 people. American flags went up across the country, soldiers patrolled the streets of New York and the president, his arms around a firefighter, grabbed a bullhorn in the rubble and vowed "the people who knocked these buildings down will hear all of us soon!"

Experts say it is not surprising that some of the families most directly affected by the attacks wanted a nonviolent response.

Sandro Galea, a Columbia University professor who has studied behavior after natural disasters and Sept. 11, said people generally exhibit "very pro-social behavior" after a disaster, contrary to the "myth" that they panic and act irrationally.

"I would consider efforts to promote less opportunity for human conflict and human suffering to be the ultimate in pro-social behavior," Galea said.

For Potorti, the conviction that war was not the answer only grew as he watched the country celebrate Thanksgiving and Christmas while dropping bombs in Afghanistan. He joined a group called Sept. 11 Families For Peaceful Tomorrows, enduring shouted insults such as "The `60s are over!" as he participated in peace marches.

"It was an odd time to be marching for peace through cities so directly affected by the catastrophe of 9/11, a time when people would yell in anger out of car windows and express their disbelief to our faces," Potorti, of Cary, N.C., wrote in recounting his experiences on the group's website.

The Sept. 11 families would have an important impact on the peace movement, bringing legitimacy and credibility to anti-war protests and helping to attract mainstream support, said David Cortright, director of policy studies at the Kroc Institute for International Peace Studies at Notre Dame.

While the families condemned terrorism, they also emphasized a need for a response that didn't lead to war and the casualties it would create, Cortright said. "I think their message was a powerful one."

Members of Peaceful Tomorrows spoke out at vigils, churches and school groups. The group advocated an international effort to bring those responsible for the attacks to justice in compliance with international law. A few even traveled to Iraq and Afghanistan to highlight civilian casualties from the wars fought in the names of their loved ones.

Colleen Kelly, a New York nurse whose brother, William Kelly Jr., was killed in the World Trade Center, said she wrestled with feelings of revenge, too, and felt relief when the American military recently killed Osama bin Laden. But Kelly, who was among activists who traveled to Iraq two months before the war, said she related to civilians in Afghanistan and Iraq who would be killed in any war.

"There are now families on the other side of the world who feel like my family," Kelly said.

Kelly said she and other Sept. 11 families received many emails and letters of support for speaking out against war.

"It did give people permission to feel those same feelings and verbalize that," she said.

Peter Gadiel, whose son was murdered on Sept. 11, is among the Sept. 11 families who have taken a harder line and clashed with Peaceful Tomorrows. He is president of Sept. 11 Families for a Secure America, arguing illegal immigration was at the heart of the plot, and says the war on terror was necessary.

"You don't stop violent people by being nice," Gadiel said.

Debra Burlingame, whose brother Charles was the pilot of the hijacked plane that crashed into the Pentagon, co-founded a group called Keep America Safe and has spoken in support of the war on terror. Among other things, she joined other victims' relatives who testified in court in Germany in 2003, urging the judges to give the maximum sentence to a Moroccan charged with helping the hijackers.

By contrast, Terry Greene, a Cambridge, Mass. resident whose brother, Donald Greene of Greenwich, Conn. was killed in the attacks, was among the first to appeal for calm in letter to the local newspaper days after the attacks.

"Certainly we must prevent those who perpetrated this violence from launching any further attacks," Greene wrote. "At the same time, the last thing that our family wishes to see are any more innocent lives lost and their families torn apart out of panic, misplaced anger, or hateful prejudices."

April Naturale, director of disaster services for the Mental Health Association in New York who has worked with Sept. 11 families, said those that have advocated for peace provided an extraordinary example of resilience.

"I think it's a natural, innate ability that we have to try to heal ourselves by coming together in a peaceful way," Naturale said. "There must be something about us as humans that knows we won't survive otherwise."