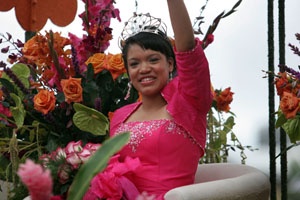 The 2008 Rose Festival Queen Marshawna Williams, from Cleveland High School, is one of five African American queens in the event's history.

Editor's note: two people have called and written in with lists of African American Rose Festival princesses and queens through the history of the Rose Festival. See a reader comment posted at the end of this story -- and please keep writing in and posting your information on the history of this important institution. The Skanner News would also love to repost any historical photos, email them to Lisa@TheSkanner.com.

Word that Jefferson High School won't be fielding a single Rose Festival princess this year – the first time any school has ever missed out on the venerated institution – has outraged and saddened local boosters.

"It looks like everything, for the last 30 some years that I've been working to keep this school open, every time if anybody's going to miss out on something, it's always Jefferson," said 1947 Jefferson graduate Vesia Loving.  "Whether they're Black or White, it doesn't bother me what color they are, but I want somebody to be represented from that school."  The Skanner News Video: Chelsea Deloney, Jefferson High Rose Princess

A representative from the Rose Festival told the Skanner News that several girls applied to be princesses, but only one qualified to compete for the $3,000 scholarship awarded to each school's princess.

After that one girl's application was accepted, Jefferson officials told the Festival that they would not be endorsing her because of something that she allegedly did at the school, leaving her bid to be tossed out.

No details are available about the girl's identity or exactly why she was barred.

"Part of the challenge too is we have plenty of girls here who would have been excellent candidates to represent our school but unfortunately they didn't jump through the hoops fast enough to get their paperwork in or they had conflicts and were unable to participate."

"It's not a Rose Festival problem, I think it's a Jefferson problem," said school booster and Rose Festival pageant judge Robert Phillips, a 1969 Jefferson graduate. "I don't think the Jefferson principal or the staff there did enough to promote the opportunity among the students."

Loving and Phillips noted that the racially-charged past history of the event make it an important platform for Civil Rights as well as North Portland's visibility around the state.

"It's the first time since 1930 that the school hasn't had a princess," Phillips said. "That's just crazy to me. There's never been another school that didn't have a princess.

"Even Marshall High School had two girls this year, and it's closing," he said.

Phillips, who has served as a judge since 2009, says participation in the Rose Princess competition has been declining over the past few years, for a variety of reasons: the time commitment is significant, and can extend into a girl's freshman year in college; there are academic requirements and paperwork to be filed; some people don't think pageants are "cool" anymore.

Last year officials started allowing high school juniors to participate as a way to increase the pool of interested girls.

"Girls from foreign countries still see America as a land of opportunities and so when they see something they see it as an opportunity," he said. "I talked to one girl who participated and she said other kids think it's not cool, and so they stopped competing, which doesn't make a lot of sense."

The girls chosen as Queen are given the opportunity not only to travel to the Rose Bowl in Pasadena, Calif., but often to other parades and events around the nation and outside the country.

"But the key thing is, it just makes me sick to the stomach, really, that there is no one from Jefferson -- one, because that princess represents that school, and two, what people see about that princess, they see about Jefferson.

"It allows the school to stand out, the visibility of that – it's beyond me why no one at the school helped nurture that along," Phillips said.

"I know that when I was at Jefferson people were killing to be one of the five princesses from the school and be one of the ones chosen to represent at the festival," he said. "I know one princess was elected queen the year Jefferson was slated to be closed, and it changed the dynamic of the school.

Loving says she is especially outraged because as a senior at Jefferson in the 1940s, she was encouraged to apply for the Rose Court but was shut out because "there were no Black princesses."

"To me it's the principle of the thing," she said. "All the kids up there and there's only one who could be qualified?"