Video: Youth on a Mission Thriftstore Helps Teens Turn Their Lives Around 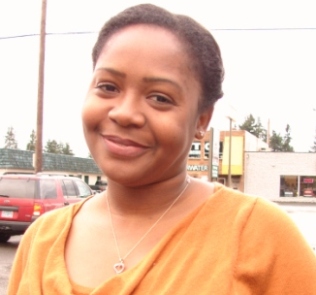 Willie Brown, executive director of the Black Citizen's Coalition of Portland Neighborhoods, knew that good teens sometimes do bad things – especially when they don't have enough adult support around them, or they fall prey to substance abuse. Brown saw the need for a positive work-focused program that would give youth on probation or with a juvenile justice history, the opportunity to work.
"The kids need to have sustainable jobs," Brown told The Skanner News. "There are none out there right now for the kind of kids that we're working with, indeed who face these kinds of challenges every day in life. And so it's tough enough when you don't have a record, but think about how it is for those kids we work with facing those challenges. It's very difficult."  The Skanner News Video: Willie Brown
PHOTO: Amani Alfallatah, pictured here, is just one of many adults who are helping the youth learn all the skills they need to manage and run the thrift store. Originally from Saudi Arabia, Alfallatah was a high-school math teacher before going to Willamette University as an MBA post-graduate student. "It's been a great experience working here, to put my knowledge into action and to see the youth here change their lives."
Jorge Lepe-Sanchez, an 18-year-old from Southeast Portland, says he loves his job. He's a senior but he won't be able to graduate immediately because of the time he has lost. Now back on track, he says he'd like to eventually go to college and study engineering, because he loves science and math. He knows that won't be easy for him. "I have a baby girl – seven weeks old—so I'm trying to support her. Work will have to come first," he says.
About 10 teens work at the store at any one time. They all must apply for the position, and go through an eight-week job training program—that includes anger management skills – before they start working behind the scenes to collect donations, get items ready for sale and create store displays. Rob Halvorson, Community Justice Manager with Multnomah county's juvenile justice department said competition to get into the program is fierce.
"When we hire youth we pack the place," he said. "They show up, they want to work' they want to do something better for themselves and their families."
Halvorson's job is to connect youth with criminal histories to employment, school and training opportunities. These youth desperately want to leave their mistakes behind, but to make progress they need worthwhile activities, goals, support and hope for a better future, Halvorson says. "This allows them to get some experience under their belt so they can compete in the outside working world. And they can get a little money under their belt."
The youth work 10 hours a week and get a paycheck of $75. Most are still high school students so they come to work for a couple of hours at a time after their school day. They have to keep their grades up, and if they owe restitution they must pay it back out of their wage.
The long-term plan is for the county to back out. "We don't want to run this program," Halvorson said. "We want this to be a resource in the community for kids, and something that can sustain itself so they don't have to be involved in the system."
Alyssa Lee is leading the youth team. Her past includes a juvenile conviction, but after paying her debt to society and engaging in treatment, Lee is emerging as a positive, motivated leader. So what are her goals?
"My goals for the store are to give more youth jobs and to keep more youth off the street so they can start a good life," Lee says. "I can't stress enough that we have built this from literally nothing; we got donations; we organized the store and the displays. We got to make it our own thing."
And her personal goals?
"Just to keep on doing good," she says. "Already I'm off probation; I'm a junior and going to college. So I'm starting off with a four-year Psychology degree and maybe I will go into Law or Medicine. I'm still at the beginning so I don't know yet."
That's the kind of outcome that professionals say is possible for many more teens who get off to a bad start in life. And it's part of the reason why Multnomah County Chair Jeff Cogen believes the program will be well worth the $50,000 in county startup funds.
"This is about giving young people the tools and the training to make themselves successful; it's about believing in them and supporting them," he said.
But he stressed that the county sees this as an investment that will save money long-term.
"This is a lot cheaper than keeping these kids in the juvenile justice system," he said. "We can't afford to keep incarcerating kids; we need to turn these kids into assets for our community… So even if you are heartless – and don't care about the kids, you should still love this kind of program because we don't want to spend money incarcerating kids."