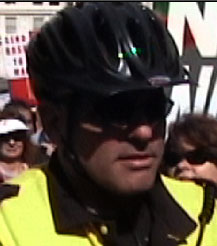 Portland Police Officer Leo Besner -- set for promotion to sergeant this week – has drawn yet another tort claim against the City of Portland, this time for allegedly arresting an innocent business owner in front of his own store "for questioning" before releasing him without charges.
African American shop keeper Sean Hartfield, a local property owner and retired attorney, filed a claim on Sept. 30 for unspecified damages against the city and the officer for assault, battery and false imprisonment.
Hartfield's tort claim details an Aug. 22 incident that saw Besner handcuff him on the sidewalk in front of The Consignment Shop, after one of Hartfield's customers dialed 911 because a strange man pulled a knife and attacked Hartfield inside the store on Martin Luther King Jr. Boulevard. The alleged assailant was also arrested and faces charges in the incident.
Meanwhile Besner -- whom critics call "The Million Dollar Man" because of the misconduct settlements he has cost the city, including half a million dollars in the 2005 fatal shooting of a man talking with crisis negotiators -- is expected to receive his promotion Thursday despite community criticism.
Hartfield has since closed down The Consignment Shop because, he says, if a local shopkeeper can't call the police in an emergency without getting arrested himself, then, "How can you stay in business?"
The Hartfield incident resembles a 2002 case in which Besner tasered an elderly man, Charles Lincoln, who was trying to subdue a knife-wielding woman.
Besner's aggressive detention of Hartfield, a crime victim who was fully cuffed and swarmed by police squad cars in the middle of the day on a busy street in front of his business, not only hurt his professional credibility and cost him customers, Hartfield says, but it made him re-think whether his race could be an obstacle to doing business in Portland.
"As I said in my tort claim notice, I'm going to need those guys sometime, whether it's because of a shoplifter or other mentally ill person," Hartfield says.
"If under these circumstances, when I have an obviously mentally ill person, witnesses up front, and I'm the owner of the store – under those circumstances if they can't figure out who the good guy is and who the bad guy is?"
Portland Police Chief Mike Reese confirmed to The Oregonian this week that he intends to promote Besner despite the seriousness of his misconduct in the past.
According to the watchdog group Portland Copwatch, Besner's misconduct has resulted in settlements including: $338,891 in the 2003 assault on political protestor Bill Ellis; $177,000 in the assault of teenaged transit rider Maria-Janeth Rodriguez-Sanchez in 2003; $500,000 in the shooting death of Raymond Gwerder in 2005; and $175,000 in the intimidation of Harold Hammick, Ri'Chard Booth and Alex Clay in a downtown parking garage in 2007.

Hartfield's tort claim alleges that when a mentally disturbed man pulled a knife on him in front of his customers, a struggle ensued in which Hartfield's handgun – which he has a legal permit to carry – fell out onto the ground.
As multiple witnesses looked on, Hartfield was able to physically overpower the man and get his gun back and holster it, as police units arrived outside.
Hartfield says the aggressor alerted Besner that Harfield had a handgun, and was "trying to kill him."
Over the objections of witnesses who'd seen the struggle, the officer demanded the gun, commanded Hartfield to put his hands behind his head, and then confiscated his wallet to check for a permit, Hartfield says.
When Besner claimed not to be able to find the gun permit – which Hartfield maintains was right in the front of his billfold where it was easily located hours later at the precinct – he handcuffed Hartfield in front of his store next to the Starbuck's parking lot and refused the business owner's request to continue the discussion inside his building.
"And one of the witnesses said, hey, he owns the store, he's the victim, and Besner told her to stand back," Hartfield says.
Because of the tense standoff with the officer, Hartfield refused to give any testimony without his attorney present; that's when "things got weird," Hartfield says.
Besner allegedly re-applied the handcuffs in a tighter hold behind Hartfield's back and pushed him into a squad car while the witnesses were interviewed.
The claim says one customer then asked for her consigned items back while Hartfield sat cuffed in a police cruiser.
Eventually, as Hartfield continued to refuse questioning without his attorney present, Besner drove both him to the Northeast Precinct, where Hartfield says Besner refused to remove the handcuffs or allow him to use the toilet near his cell while they waited for his attorney to arrive.
In the end, Hartfield's lawyer quickly facilitated a police statement and drove him back to his store.
"I was surprised, after I read the police report, that Besner admitted that he refused to remove the handcuffs until after my attorney arrived," Hartfield says. "I was thinking that it could not get any worse – and it did. That was one of the more vindictive things that he did."
Hartfield is particularly disturbed by his treatment after Besner had interviewed witnesses and "had all the facts," he says. "Besner had spoken to the other police officers, he had all the information from the witnesses, so by the time he made the decision to drive me to the precinct, and he knew that there were witnesses who saw me trying to get this mentally ill person out of the store.
"When the facts were getting kind of weird, I thought: he seems hostile and why is he so adamant about questioning me outside of the store?
"And so under those circumstances I did exactly what I would tell my clients and that is: You don't talk when you're being accused of something unless you've got an attorney. You're not going to talk yourself out of whatever presumption this officer has already made."
The entire experience prompted Hartfield to close his consignment shop even though, he says, business was brisk and he had hired several new staff.
"As I said in my tort claim, I'm going to need those guys sometime," Hartfield said. "It's inevitable that when they get here and I've wrestled down some White woman on the floor because she's stealing, and she's yelling, I'm going to end up at the precinct again.
"And I know that sounds really extreme, but I think that's reflective of the demographics of Portland," Hartfield says. "And that poses an issue for me, just mentally, of whether or not I'm going to be able to stop that person.
"I know in the movies the threat is to her, but in reality, no – because if she starts yelling, I have some explaining to do.
"And this really brought that to a head."