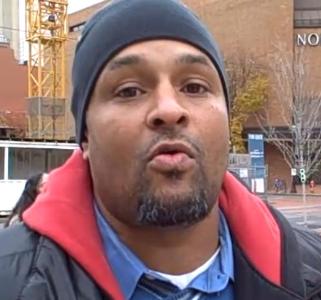 The Unemployed/Underemployed Marginalized Workers Campaign gathered on Monday, Nov. 29 in Director's Park in Downtown Portland to encourage members of Congress to extend unemployment benefits to millions of unemployed workers.

Eleyna Fugmen, the self-help group's organizer, helped rally a number of unemployed workers who are struggling to survive—even with unemployment assistance.

George Slanina said unemployment benefits are about the same as a low-income part-time job.

"It doesn't fulfill your needs," he said. "It doesn't cover your full-time bills."

The Rev. Lynn Smouse of Ainsworth United Church of Christ says she can see the effect of the economy on people in her role President of Ecumenical Ministries of Oregon.

The unemployment benefits extension bill – H.R. 6867 – may be up for a vote this week. As of Wednesday afternoon, Congress had still not acted to extend the benefits.
"I am deeply disappointed that Congress has yet to extend long-term unemployment insurance in time for the holidays," said Rep. Earl Blumenauer, D-Ore."For nearly two million workers, these monthly checks – just a couple hundred dollars to help make ends meet – have been a lifeline as they look for new jobs during this awful recession. I find it especially shameful that we are threatening to leave these families out in the cold at the same time that some members of Congress want us to spend $700 billion we don't have on tax cuts for millionaires who don't need them. Cutting off unemployment benefits won't help us end this recession, it will only make it worse. I call on members of both parties to set aside politics and vote to extend these benefits for unemployed Americans."