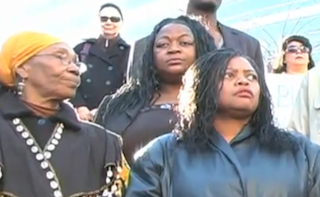 Portland Police Officer Ron Frashour, under intense scrutiny after fatally shooting the unarmed and suicidally-depressed Aaron Campbell in the back during a stand-off last January, was fired today by the Portland Police Bureau.
If it survives the labor union grievance process that now kicks into gear for Frashour, the move would make him the first police officer permanently fired by the City of Portland for killing an unarmed citizen in the line of duty.
The announcement was made after the "mitigation" process required by the disciplinary rules within the police bureau. Frashour, who had drawn multiple citizen complaints and, so far, three lawsuits over his use of force in the past, had become the poster child for police brutality in Portland.
"This is very good news for the community, this is what we've been calling for, the firing of Officer Frashour and punishment for all the officers involved in this incident," said Dan Handelman of Portland Copwatch and the Albina Ministerial Alliance for Peace and Justice Reform. "Hopefully this will also lead to better communication in the future, because this was the third case where a police sniper shot somebody who had been on the phone with a police negotiator, and they didn't need to shoot at all."
(Click here for Portland Copwatch's list of Portland Police Shootings and Deaths in Custody, 1992-May, 2010 ).
Mayor Sam Adams and Police Chief Mike Reese this morning issued statements about the decision, which came less than two weeks after Campbell's family filed a wrongful death suit against the city for an unnamed amount in damages.
"The investigation found no malicious intent on behalf of any of the officers involved with this event," Reese said in a statement. "But, based on the investigation, these officers acted outside of their training and outside of Police Bureau policy. A loss of life resulted. Thus, the discipline we have handed down is warranted."

The disciplinary roster included termination for Frashour, and 80 hours of unpaid suspension for Officer Ryan Lewton, who fired bean bag rounds at Campbell's back; and 80 hours of unpaid suspension for supervisors Sgt. Liani Reyna, and Sgt. John Birkinbine.
"These were difficult decisions. Police officers are called on to make split-second decisions every day, and at times those are life-and-death decisions," Reese said. "Officers receive regular training in policy and procedure; ultimately though, the decisions made in the course of their work are their own."
Reese urged Portland residents to go online and read all the documents relating to the case and the disciplinary measures, which are posted at www.portlandonline.com (follow the links to the Police Bureau page).
Handelman noted that the department's transparency in releasing all the documents in the case including the disciplinary letters written for each officer punished, is unprecedented and deserves praise for the city and the police bureau.
He noted that it took months to get public release of the police disciplinary letters in the 2006 James Chasse death in custody case, which ended in a $1.6 million settlement in late July of this year.
In the Campbell killing, city officials in September released statements indicating their intent to fire an unnamed police officers over the Jan. 29 shooting, but they didn't specify who was on the chopping block because the officers in question still had not completed the entire disciplinary appeals "mitigation" process, in which they are allowed to explain any special circumstances that led to the actions in question.

The Use of Force Review Board in August recommended that Frashour should lose his job for firing the shot in the back that killed Campbell, 25, as he was trying to give himself up to police during a mental health crisis triggered by the death of his younger brother from heart problems.
The Grand Jury in February found officers did not violate policies, but it also expressed outrage at the scene that led to Campbell's death and urged the city to rethink its rules on use of force.
In an almost unprecedented move, jury members pushed Multnomah County District Attorney Mike Schrunk and Mayor Sam Adams to petition the court to reveal transcripts of its hearings. "Portland deserves better," jury members wrote in a statement. "Aaron Campbell deserved better."
Portland Copwatch, a nonprofit group that keeps detailed records of violent police incidents on its website, www.portlandcopwatch.org, had advocated for Officer Lewton to receive the same punishment as Frashour, because, the group argues, it was Lewton's shooting of Campbell in the back with multiple bean bag rounds that set in motion the sequence of events that turned deadly Jan. 29.
Documents show that Campbell, who had hours earlier looked on as his girlfriend and their young children left the apartment where he was allegedly threatening to kill himself with a handgun, had backed out of the building with his hands on his head after a successful negotiation with police via cellphone.
It was then that he was – within a matter of seconds – shot in the back with bean bag rounds, as well as an AR-15 automatic shotgun, and attacked by a police canine unit. He was cuffed and left bleeding in the rain while officers tried to figure out whether he was armed or not; a medical unit called to the scene pronounced him dead some 20 minutes after the shots were fired. His gun was later located in a hall closet inside the apartment.
"Campbell was not aggressively resisting the police at the time that Lewton fired the beanbag, but Campbell had his hands on the back of his head -- which is not dangerous to the police," Handelman said. "And Lewton decided, on his own, to shoot the bean bags and try to get him to comply, and it's not a compliance tool – it's a less lethal weapon that could kill somebody."
Portland Copwatch lists two other police shootings of individuals while they were in contact with hostage negotiators and preparing to give themselves up: Raymond Gwerder in 2005, whose family eventually won a $500,000 settlement with the City of Portland; and Leslie Paul Scott Stewart, who was shot in the head by a police sniper in 2007 but survived.
The only other Portland Police Officer fired for killing a civilian was Lt. Jeffery Kaer, who in 2006 shot to death a motorist who had been sleeping in a car in front of Kaer's sister's house, and was fired by then-Mayor Tom Potter. Kaer was reinstated with back pay by a state arbitrator's ruling in 2008.
Watch The Skanner News Video: Aaron Campbell rally