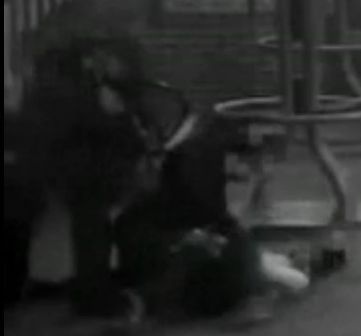 Despite media reports that Portland Police Officer Ron Frashour has been fired from the bureau, city and union officials declined to confirm that.
At least one Portland Police officer is apparently on the chopping block for the fatal shooting in January of Aaron Campbell, but a flurry of statements Wednesday morning by the mayor, the police chief and the officers' union left unclear who and exactly how a handful of officers will get hit.
One police reform activist stresses that is an important point, because if an officer is fired, his or her union contract provides for an opportunity to keep the job.
The disciplinary announcements came one day before police union negotiations with the city are set to resume, with limited public access.
The Use of Force Review Board last month recommended that Frashour should lose his job for firing the shot in the back that killed Campbell, 25, as he was trying to give himself up to police during a mental health crisis triggered by the death of his younger brother from heart problems.
Contacted Wednesday, Portland Police Association President Daryl Turner declined to confirm specifics beyond the union's written statement, which said that Frashour, Officer Ryan Lewton, Sgts. Liani Reyna and John Birkinbine, and other officers have been specifically named for penalties.
"What cannot happen is for Portland police officers to face termination and substantial discipline for doing their jobs correctly," the statement said. "The Portland Police Association will challenge the proposed disciplinary action, and is confident that a neutral third party will conclude that the grand jury made the correct decision."
The Grand Jury in February found officers did not violate policies, but it also expressed outrage at the scene that led to Campbell's death and urged the city to rethink its rules on use of force.
In an almost unprecedented move, jury members pushed Multnomah County District Attorney Mike Schrunk and Mayor Sam Adams to petition the court to reveal transcripts of its hearings. "Portland deserves better," jury members wrote in a statement. "Aaron Campbell deserved better."
Chief Mike Reese indicated officers facing discipline in the Campbell slaying would now enter a phase of mitigation, which allows them to meet with top brass and explain any compelling circumstances before final punishment is meted out.
Today's announcements seemed aimed at bringing to a close police review investigations that critics charge have taken too long.

Disciplinary processes in the Portland Campbell slaying and the beanbag shooting of a 12-year-old African American girl on a TriMet train last November were both covered in the single press release issued this morning by Reese's office.
Reese called the beanbag incident, in which Officer Chris Humphreys and other officers scuffled with the pre-teen on the platform of a MAX train after curfew, justified.
The spotlight on Humphreys' conduct in that case triggered a union march weeks later in which hundreds of police officers converged on City Hall wearing blue t-shirts reading: I Am Chris Humphreys.
The Oregonian reported at the time that the only other such march by police union members was in 1981, after two officers admitted to throwing dead possums in the doorway of an African American-owned business in Northeast Portland as a prank.
A court trial this year found that the girl threw a punch at another officer, who wrestled her to the ground before Humphreys took a step back and shot her in the thigh with the rifle-shaped weapon.
The incident was caught on TriMet security video, which was released to the public.
The girl, whose identity was not revealed, was convicted of assaulting a police officer and resisting arrest; she was put on probation and community service.
Chief Reese said today the bureau is reviewing use of its beanbag shotguns, as well as inter-agency agreements within the Transit Police Division "to ensure that all of the agencies' Internal Affairs policies as well as training are aligned."
Humphreys has also faced complaints in other cases, including involvement in the James Chasse killing, which this summer ended in a record $1.6 million City settlement. Chasse, like Campbell, was suffering from a mental health crisis at the time of his arrest.

On the hot seat in the Campbell shooting, besides Frashour, are Lewton, who fired beanbag rounds at Campbell; Reyna, and Birkbine, who were supervisors in charge of the operation.
"My concern is that Officer Lewton and Officer Frashour get the same punishment," said Dan Handleman of Portland Copwatch. "I'm saying that Lewton should get fired as well -- if Frashour does – because Frashour wouldn't have used his gun if Lewton hadn't fired the beanbag rounds first."
Frashour testified to a Grand Jury earlier this year that he fired his AR-15 rifle because Campbell did not respond to multiple bursts from the beanbag rifle.
Other officers on the scene at the dark, rainy parking lot in Northeast Portland testified that a team of negotiators, called in by Reyna, had successfully talked Campbell out of the apartment where he sat alone and despondent with a handgun after his girlfriend and their two small children left the building.
Lewton, Frashour and a canine handler formed a "security perimeter" and confronted Campbell after Reyna was called a few yards away to report on the situation for her commanding officers. Grand Jury transcripts indicated Campbell was beanbagged, shot and attacked by a police dog within seconds, as the three police never heard from the other officers that Campbell was surrendering.
No weapons were found near the body, and Campbell's handgun was found in a closet inside the apartment.
"The involved members and their labor organization will have an opportunity to meet with me, and provide additional information they want to be considered before the Mayor and I make a final decision," Reese said today.
"My priority is to protect the integrity of due process and not discuss the proposed discipline," he said. "When final decisions are made, that information will be released to the community and as an organization, we will learn from this tragic incident."

After a six-month stalemate in contract negotiations, a city spokesman told the Portland Mercury this week that essentially half of the negotiation meetings will be open to the public, and half will be closed.
Roy Kaufmann, of Mayor Sam Adams' office, told the Portland Mercury that when the city hosts negotiation meetings – as it is Friday, Sept. 17 at 9 a.m. in room C of the Portland Building at SW 5th and Madison -- the public will be allowed in to watch, but not participate.
When the Portland Police Association hosts the gatherings, which is every other meeting, the doors will be closed to observers.
Issues expected on the table include officer overtime and annual reviews; drug testing will be discussed, Kaufmann told the Mercury, but not city residency requirements.