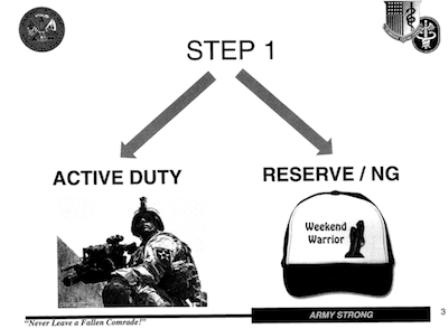 The fatal Vancouver police shooting of a gun-toting Oregon Army National Guardsman Tuesday has drawn attention back to an investigation of Joint Base Lewis-McChord's alleged failure to provide full and timely services to National Guard members.
Oregon Army National Guard Spc. Nikkolas W. Lookabill, 22, of the 41st Infantry Brigade, was shot to death around 4 a.m. Tuesday as he walked through a residential area and allegedly refused to put down his gun when confronted by three Vancouver police officers.
Lookabill returned home last May after one year's deployment at Camp Victory in Baghdad; his brigade was processed through Lewis-McChord on arrival stateside.
Earlier this year, the leak of a powerpoint slide (above) from a U.S. Army training at Lewis-McChord labeling National Guard members as "weekend warriors" touched off calls by Sen. Ron Wyden and Rep. Kurt Schrader for an investigation into the Army's "dual track" system of providing Army National Guard soldiers slower and inferior medical treatment to that of active duty Army soldiers. 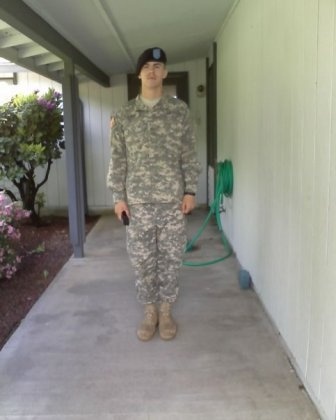 Wyden spokesman Tom Towslee said the investigation is in progress. "I know that Fort Lewis-McChord had taken the complaint seriously," he said.
Of the 124 Oregonians killed so far in Iraq and Afghanistan, 19 have been Oregon Army National Guard troops, not including Lookabill (pictured at left in an image from his Facebook page taken after basic training in 2008).
A reader comment posted late Wednesday night on the Oregonian newspaper's website contradicted the newspaper's story, which said, "As a member of the 41st who returned from Iraq through Joint Base Lewis-McChord, Lookabill received an unprecedented level of career and mental health counseling as the Oregon Army National Guard attempted to ease troops' transition back to civilian life."
The first reader comment, from "Surfingchevelle," says, "UUUhhhhh.......no we didn't....still waiting for my VA counselors appointment I was promised along with a handful of my buddies that want it as well, but they would like you to think that we have been 'taken care of' by shuffling us through a bunch of garbage briefings to 'save face'...........still waiting.........its been three months now.................."
"This case is an example of why we have been working so hard with the Oregon Guard and other groups supporting veterans to increase funding for PTSD diagnosis and treatment," Rep. Earl Blumenauer told The Skanner News in an email Thursday.
"Everyone needs to be aware of how extended deployments in America's two wars have affected our troops physically, mentally and even economically," he wrote. "Returning troops and their families need all of the support they can get from us, and I will continue to do everything I can to ensure veterans get the resources they need."
U.S. Army Secretary John McHugh toured Lewis-McChord at the end of August to examine how the base processes soldiers to return home after deployments.
"For a long time, we, if not overlooked, certainly misunderstood the complexity of bringing a soldier back home, reintroducing them into a totally different environment than he or she had had been experiencing during that deployment, helping the families come together as well," McHugh told an interviewer for the Lewis-McChord weekly newspaper.
"They're human beings and it's not just a switch you can turn on or off. We need to ensure they have the support and facilities necessary to do that."
Schrader and Wyden, in a May letter to McHugh, alleged that bureaucrats at the Readiness Center at Fort Lewis McChord are "overturning medical decisions made by doctors." The goal, the lawmakers say, is to ration health care to Guard members so that there is more room for and services available to active duty military, resulting in "a negative impact on a service member's treatment."
Soldiers have also been encouraged to seek care for war wounds from the Veterans Administration or TRICARE, denied second opinions, and sent home without treatment if they cannot be treated within 90 days. The charges add that Guard members who complain "have been threatened with serious disciplinary action."
"For those that return home, we have a very, very deep obligation to see that they are provided the resources and programs they need to adjust back to civilian life," Gov. Ted Kulongoski told The Skanner News last May.
"And that is no more true in the National Guard than it is in the regular armed services, and I would actually argue even more important, because citizen soldiers -- those who are employed working and then get a notice that they're going to be deployed to Afghanistan and Iraq -- not only have a disruption in their personal lives and their families, but in their work lives as well."

To see the full list of Oregon war casualties go to http://governor.oregon.gov/ and click on "Oregon's Most Honorable."