Grand Jury transcripts in the shooting death of Keaton Dupree Otis may be released as early as today, Multnomah County District Attorney spokesman Norm Frink said.
The May 12 shooting is the third fatal incident involving police interacting with men in mental health crisis so far this year. City leaders have made it clear they support release of Grand Jury transcripts -- which have previously been kept secret -- as a police accountability measure.

A court reporter has been ill, which delayed the expected release of documents, Schrunk said Friday. A Grand Jury cleared Portland Police officers of wrongdoing in the case.

Among the questions which may be answered by the Grand Jury transcripts is the mystery of why no bullet casings were found on the scene from Otis' gun. Police say Officer Chris Burley was shot twice by Otis, but a roster of items recovered at the crime scene indicated Otis' gun would have discharged "gold-colored" casings, none of which are listed on the evidence log.

However some 30 "silver-colored" casings are listed, all apparently from police weapons. In the course of the shooting, the police investigation showed that Officer Jim Defrain had fired 15 rounds; Officer Andrew Polas had fired six rounds; and Officer Cody Berne fired 11 rounds. All used the same make and model service weapon, a 9 mm Glock.

The police documents indicate Otis was carrying a Taurus Millenium 111 PT semi-automatic handgun, a model made in Brazil and designed for concealed carrying, according to the company's website. 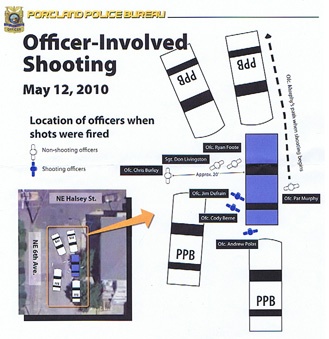 In documents released by the police bureau, Officer Brian Dale reports that he "later saw a silver semi-auto handgun on the driver's seat of the suspect's car," but nothing else is noted about its condition. Otis' dead body was reportedly half in, half out of the Toyota Corolla, as officers had tried to physicallly drag him out of the driver's seat.

Burley confirmed at a press conference Thursday morning that he was one of the officers trying to drag Otis out of the car, and that he had his hands on Otis' shoulders just before the shots were fired. He is shown in the diagram as being well away from Otis' vehicle, on the driver's side, during the shooting.

Burley spoke surrounded by middle school graduates of the Gang Resistance Outreach and Training group he leads.
The GREAT kids faced a bank of television, radio and newspaper reporters to recount their feelings of sadness and fear upon learning their teacher was shot in a traffic stop.
Afterward, Burley told his emotional story about how the incident affected him, and described the counseling and support services he's getting to recover from the shooting. Burley did not fire his weapon in the incident.

A television reporter pressed him on the issue of whether he knew Otis was planning to shoot. Burley twice said he had no idea what was going to happen. 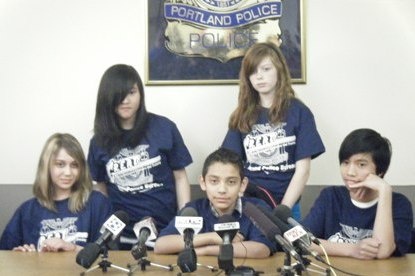 Police records indicate the officers, all members of the HEAT gang enforcement squad, pulled Otis over for what appears to be a pretext stop.

Officers testified in the bureau's internal investigation that Otis failed to signal lane changes, was wearing a hoodie up, and stared at one police car through his rear-view mirror, all of which gained the attention of officers who pulled him over near Lloyd Center.
The nearly 700-page collection of reports released by the Portland Police Department this week raises a number of questions, which may be answered by the Grand Jury transcripts, including motivation for the stop in the first place, as well as what may be questionable actions at the scene.

A police bureau diagram shows that one officer actually ran through the trajectory of gunfire unleashed by three other police officers to get out of the line of fire.

Police Chief Reese and Mayor Sam Adams today released to the media the results of the bureau's investigations into the May 12 incident, which ended in Otis' death from multiple shotgun wounds, and an officer hospitalized, also with gunshot wounds.
The transcripts from the Grand Jury investigation, which found no wrongdoing by the police officers, may be released this week, pending a judge's order.


Police report that Otis was armed with a semi-automatic handgun, and that the situation went out of control as he reached for the gun in a car's glove box.
They say Otis was hit by "less lethal" weapons three times before the gunshots were fired, and that he was treated at the scene by paramedics before being pronounced dead.
Burley has since been released from the hospital and is expected to make a full recovery.
The police documents indicate Otis was carrying a Taurus Millenium 111 PT semi-automatic handgun, a model made in Brazil and designed for concealed carrying, according to the company's website.
The official police bureau diagram of the Otis shooting shows Officers Defrain, Berne and Polas on the left side of the car firing at the driver, while Murphy is on the right side of the car.
Murphy apparently ran from a position just behind the passenger side window, forward in a trajectory parallel to the line of fire.
Also this year, Murphy was involved in a Jan.28 incident in which a Portland Community College women's basketball team member was stopped by police, cuffed, and released, triggering an investigation by the Independent Police Review Board.
Records showed Murphy held Delease Carter's legs as another officer cuffed her. Carter, whose coach at PCC pulled her from a basketball game the next morning because of fears she had a concussion, and who was treated at Emanuel Hospital for injuries sustained in the encounter, has filed a tort claim against the city.
The records in the May 12 Otis shooting show that a bicyclist who stopped on a nearby street corner, as well as a nearby resident who recorded the stop on an iphone, were key witnesses able to describe the entire scene as it unfolded.
However their testimony – and the rest of the witness testimony – was contradictory, the police reports show. All witness names were blanked out from the police records released Tuesday morning.
The police report quotes the bike witness describing the three-minute stop as "routine," but adding that it progressively "got tense." By the times shots were fired, he said, the scene had become one of "controlled hysteria."
Within minutes four patrol cars boxed Otis' car in near the corner of Northeast Halsey and 6th Avenues, with seven officers on the scene at the time the gunshots rang out, police reports show.
The bike witness says Otis appeared to start arguing with the police after refusing to get out of his car.
One officer then fetched a Taser, while others tried to pull Otis out by the arms as he sat in the driver's seat.
"(Blanked out) said the officer with the taser fired it at the person in the car, and the person responded by leaning or slumping over. He said very quickly afterward, there were shots fired by the officers at the person inside the car. (Blanked out) said he could not see well enough to determine if the person inside the car had a weapon to fire back."
According to the police report, this witness described himself as "neutral to the police," and said he did not think officers "provoked" Otis until he refused to step out of the car.
The iphone witness said the officers started screaming at Otis from the very beginning of the stop because he would not raise his hands as he was ordered to do. She decided to video the traffic stop because she "figured things were not going to go well," according to a detective's report on the interview.
A third witness, who is described in other testimony as an "elderly African American woman," told officers that Otis promptly put his hands up when commanded to do so, and that when Otis' hands were raised an officer "started to hit him."
The African American witness told officers she was going to pick up her granddaughter from elementary school for a trip to McDonald's with when she saw the unmarked police car pull in front of Otis' Toyota.
She said a "bald headed officer" yelled at Otis and hit him, then a second officer Tased him through the open back passenger window before the bald officer Tased Otis again through the front drivers' side window.
"She stated shortly after OTIS was tazed the second time, he looked at her and asked her not to leave him because the police were going to kill him," the police report says.
In her interview with officers after the incident, the woman – who was described elsewhere in the report as "convulsing" and in shock after Otis' death – says she could "see the front of OTIS from his belt to the top of his head and she knew he didn't have a gun."

Otis' family, in a statement to the media, declared that the budding artist had been diagnosed with a "mood disorder," which made it difficult for him to get along in the larger society.