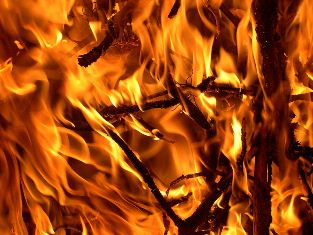 (CNN) -- Two masked men set the offices of a prominent Mexican newspaper on fire Sunday, the second such attack on the daily this month.

The armed men walked into the Sierra Madre office of the El Norte newspaper in the northern city of Monterrey, threatened a security guard, poured gasoline out of canisters and lit the building on fire, the newspaper said.

Fifteen people were working in the office at the time. Nobody was hurt, the paper said. No group immediately claimed responsibility for the attack.

Two offices of the newspaper were also attacked with grenades and gunfire July 10.

After that attack, the group sent out a message to its employees asking them to continue their work undeterred.

"With great respect and admiration we aim toward a different type of heroic action: one that is done by soldiers of freedom. Those who, with bravery, talent, compromise and discipline, not in a quick instant but in decades of battle, are able to improve the lives of others," the message read.

"We are referring to the 3,500 people who work at Grupo Reforma, including editors and advisers. Those who make an effort to make a claim against the unacceptable conditions which have led our compatriots to violence and desperation."

Since Mexico declared an open war on drug cartels, journalists have been kidnapped, killed and threatened -- particularly those who cover drug trafficking and institutional corruption.

Since 2000, more than 70 journalists have been killed in the country.

Ninety-eight percent of the crimes have gone unsolved, according to the country's National Human Rights Commission.

In March, the Mexican Senate approved a constitutional amendment that will make crimes against the press federal ones and put national authorities in charge of investigating them.