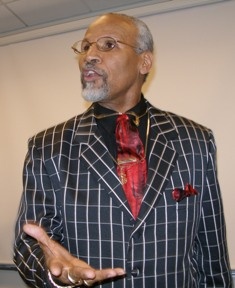 The first day of bargaining over the Portland police union's contract with the City of Portland was shut down Friday morning over the issue of public access to the negotiations.
Will Aitchison, the lead attorney representing the Portland Police Association, declared that the city's stand insisting on open talks with members of the public and media present will be disputed by the union in an unfair labor practices complaint before the Oregon Employee Relations Board.
A small group of citizens and media who showed up to the bargaining session looked on for two hours as Aitchison and city negotiator Steve Herron debated the public's right to be there. After a series of caucuses, the union negotiating team walked out of City Hall.
"Mr. Aitchison accused Mr. Herron of inviting the public," said community policing consultant Skip Osborne, who was one of the onlookers. "Mr. Herron said it was always open to the public, Mr. Aitchison said it has never been open in the past, and Mr. Herron said 'that's what it's going to be now.'"
As Attorney General John Kroger moves to loosen restrictions on public access to government documents, local journalists are celebrating the freedom of information law awareness event known as Sunshine Week with a Thursday concert fundraiser and a Saturday public forum called "Sunshine Lessons: How Open is Oregon Government?"
The talk is Saturday, March 20, from 1 to 3 p.m. in the Central Library's 120-capacity U.S. Bank Room, 801 SW 10th Ave., and features local editors and reporters as well as Kroger's spokesman, former Oregonian reporter Tony Green.

Right to Know Reform
Green said the Government Transparency Initiative launched last December by the attorney general had its roots in public feedback during Kroger's campaign for office.
"During the campaign he heard numerous complaints, and then last year he met with a group of journalists and heard firsthand what was going on," Green said. "He decided a major overhaul was warranted."
First Kroger and his staff looked at changes they could make in their immediate operations, Green said. Now the Oregon Open Meetings Law and a shorter, easier to read Citizens Guide to Public Records and Meetings are posted online as a free resource.
Kroger also established a new position, the government transparency counsel, hiring legal scholar Michael Kron to advise state officials on policy and help shepherd changes in the law through the legislature, Green said.
Kroger is touring the state for input from local members of the Oregon Newspaper Publishers Association to discuss the open government effort, meeting in Portland on Wednesday, March 31, at the Turnbull Center of the University of Oregon in downtown Portland.
One of the biggest issues, Green said, is whether bloggers should be included in the rules around Executive Session – the protocol invoked allowing media but not members of the public to stay in a closed government meeting but not report on what takes place.
"Executive Session is designed to allow a public body to have confidential discussions, but does not allow any decisions to be made in secret. All decisions by a governing body must be made in public," The Oregon law states. "Reasons for Executive Session include discussions about labor negotiations or the hiring or disciplining of a public employee. Journalists may attend most Executive Sessions, but cannot report or broadcast what was said."

Grey Areas
The issue was raised last Thursday night when a reporter for The Skanner News was kicked out of Jefferson High School before the start of a meeting regarding use of athletics funds.
Principal Cynthia Harris told reporter Brian Stimson that he was not welcome to stay for the meeting, which was between her and a group of parents.
After the meeting, Harris told The Skanner News that she was hearing the parents' concerns for the first time and wanted a chance to speak with Athletic Director Mitch Whitehurst before having to field questions from the media.
Judson Randall, the president of Open Oregon and the faculty adviser for the Portland State University student newspaper, the Vanguard, said staff meetings are not covered under Oregon's public meetings law. At a public school, administrators are not required to hold any kind of meeting in public – including meetings with groups of parents, teachers or students.
"The principal is not a public body," he said.
He said often these meetings have good rationale behind them. Administrators and other staff members want to be able to have an open and frank discussion without the penetrating eyes of the media. Randall said the tone of a meeting can change with the presence of media.

Police Union 'Lost Opportunity'
Osborne said that not only was the police union hostile to any members of the public or media observing any part of their talks – but that when he first arrived at City Hall, the Wackenhut Corporation private security guard at the entrance at first tried to block him from entering the building by denying the meeting was taking place at all.
"Then a police officer came up behind me and said, 'I'm here for the union negotiations,' and the private security guard admitted they were taking place on the second floor," Osborne said.
While union negotiations can be grounds to exclude the public and media, the parties involved in the meetings have the right to allow media to monitor the proceedings under Executive Session.
Osborne said he appreciated the City of Portland negotiator's willingness to allow observers and disappointed in the union team's attitude.
"The Portland Police Association lost an opportunity to get back some trust from the public because of the fact they refused to have transparency in this meeting," he said.
Allowing members of the public to observe the police union's new contract negotiations would allow citizens a fair opportunity to "hold accountable" the Portland Police, Osborne said.
"The taxpaying public writes the checks for all sworn officers, and if the public is writing the checks then we should have some answers."
For more information on Oregon public records and open meetings law, go to http://www.open-oregon.com/ , www.sunshineweek.org , and http://www.doj.state.or.us/public_records/government_transparency.shtml