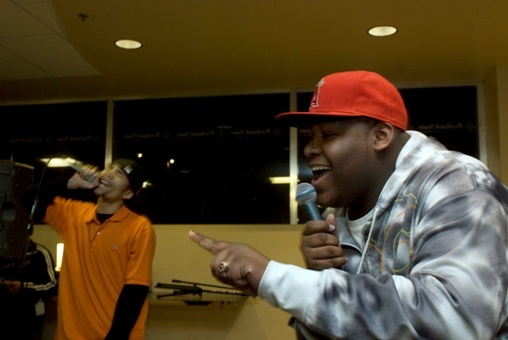 The 4th Annual Youth Summit is all day on Feb. 6, starting at 11 a.m. at Portland State University Smith Memorial Union, with pizza social at 6 p.m. and talent showcase kicking off at 6:30 p.m.
The event, including an afternoon of workshops and keynote lecture by Professor Griff of Public Enemy, is free, and youth participants receive a free t-shirt.
"What we're adding this year is a Friday night event which is a discussion and question and answer lecture period with Professor Griff from public enemy," says organizer Imani Muhammad, 2009 winner of The Skanner News Drum Major for Justice Award.
She started the event four years ago after the gang-involved fatal shooting of 14-year-old Davonte Lightfoot on North Killingsworth Street.
Lightfoot had been Muhammad's student at a local charter school, and she vowed to bring the community together to help prevent future deaths.
"The overall intention of the summit is to bring more attention of the city and the adults to pay attention to our youth, and that's always been the underlying goal being sparked by the death of a young man who was 14 years old," Muhammad says.
The Youth Summit boasts twice as many workshops as last year, and more offerings in the talent contest, which is organized by the 445th Parallel Zulu Nation of Oregon and includes a Michael Jackson dance competition.
Muhammad says the format is very similar to last year where the students are placed in a group and then they rotate to each 45-minute workshop.
Workshop presenters and their topics include: Madgesdiq -- Who Are You? Discovering Yourself Through Writing; Mic Crenshaw -- Make Believe or Real: the War on You; Renee Mitchell, Darlene Solomon (Blacque Butterfly), Erica Tucker -- Real Talk, Real Love; DeAngelo Raines -- Art Not Crime; Jesse Muhammad -- Mediocrity is Not in Your D.N.A; Karanja Crews -- 21st Century Movement Conscious Hip Hop; Carl Thomas -- Life Beyond High School; Desmond Spann (Dluxthelight) -- Hip Hop Motivates.
"If I do my math from last year there was about 80 youth that participated in the workshop last year, this year I've certainly had more outreach and more help, so I'm anticipating maybe 150, maybe 200 total. Certainly for the workshop and for youth to be there the whole time I probably would say about 150 that would be there the whole entire time.
"As it grows and as more people are involved I would love for this youth summit to grow into a national event where we're pulling youth and adults and workshop facilitators all across the United States, and that it does grow into more than just one day," Muhammad says.
"After this summit I really think it's going to grow this year into more of a spring break program or a summer program that the same individuals that are working on the workshops are able to participate in the spring or summer programs, basically offering the same thing we offer at the summit in one day." she said. "They get the workshops, they get the empowerment, they get the leadership, but we're able to expand that throughout the year."
Muhammad said this year's growth is due in part to help from city youth advocates and more organizations that are helping out.
"So I think that this year the strength in numbers of the adults that are involved will be able to grow something out of the summit," she said.
For more information go to http://youthsummit09.blogspot.com/

Professor Griff, the "Minister of Information" with the legendary rap group Public Enemy, kicks off the 4th Annual Youth Summit with a free talk starting at 7 p.m., Feb. 5, at New Columbia, 4625 N. Trenton.