Learn Where to Get Your Free Flu Shot in Multnomah County 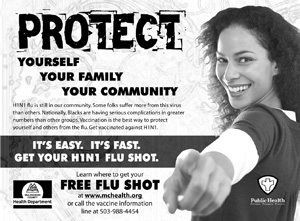 Learn where to get your free flu shot in Multnomah County click here, or phone the vaccination information line at 503 988 4454

If you have had the flu, chances are it was the H1N1 flu virus that caused it. That's because the H1N1 (swine) flu is active across the country and has been since September 2009.
Fewer people have been hospitalized during the last three weeks, but the numbers are still more than twice as high as during an ordinary seasonal flu epidemic. Last week 46 people were hospitalized with severe symptoms.
Overall 45 people have died from influenza in Oregon. In most cases doctors knew the health history and found that 98 percent of those who died (and all four children) were in a high risk group, which includes:
• Pregnant women;
• children 6 months up to 5 years;
• people aged 5-64 with underlying health conditions, such as asthma, diabetes and cardio-pulmonary disease.

The H1N1 vaccine is trickling into Oregon more slowly than expected. Public health officials anticipate a cumulative amount of 528,155 doses by Nov. 20 2009. Until more vaccine arrives, health officials are urging local heath departments and tribes to target vaccine outreach to the people who are at greatest risk for hospitalization and death. Additionally, people who take care of those at high-risk—caretakers of infants younger than six months, health care providers and some emergency personnel—should seek out the H1N1 vaccine.

Healthy people ages 5 to 24 years old are being asked to wait for their vaccine until more is available. National and state data show that this age group does not have as high a risk of hospitalization as other groups.
Public health officials emphasize that even while they're urging health care providers to focus vaccination efforts toward those at highest risk for H1N1 complications, this is expected to be a short-term situation until more vaccine arrives.

If you want to check whether you or family member needs to get the vaccine as soon as possible, or for more information on H1N1 flu and vaccines, call the Oregon Public Health Flu Hotline at 1-800-978-3040.