By Brian Stimson of The Skanner News
Published: 12 November 2009

In a nondescript brick building next to Providence Hospital, Dr. Andy Antoniskis operates a comprehensive, two-week medical detoxification program. For certain drugs – mainly alcohol and opioids – getting medically detoxified can be a matter of life and death.
For those seeking help at Providence, detox is the first step to get the drug out of the body's system and to assess rehabilitation options for the patient, says Antoniskis.
Before a patient is discharged, they will be evaluated for physical, emotional or behavioral health issues; treatment acceptance; relapse prevention, or finding the triggers in a community that could cause a relapse; and finding a suitable recovery environment.
As a not-for-profit hospital, Providence accepts 25 percent of patients as charity. For the rest of them, ability to pay dictates treatment.
"A lot of things are insurance driven," says Antoniskis. "Just like any other business … we have to have some funding source."
What separates many detox sites from Providence's, says Antoniskis, is the level of care each patient receives. Of the 250 doctors certified by the American Board of Addiction Medicine, two are at Providence. Each day, a multi-disciplinary team of doctors, psychiatrists, masters of social work and certified counselors meet to discuss the progress of their patients so "everyone's on the same page." They meet with the patient daily, and meet with the family to discuss the plan for the patient after they leave detox.
"We have a lot of stuff to do in 14 days," he said.

Beyond The Drug War

For most of the 20th century, governments pursued vigorous anti-drug user policies, driven by arrests, drug seizures and prison sentences.
Nearly 40 years after President Richard Nixon declared a "War on Drugs," Oregon's High Intensity Drug Trafficking Area task force reports marijuana, cocaine, heroin and other drugs are "readily available" in a variety of markets across the state – despite disrupting 44 drug trafficking organizations in 2008 alone. Across the United States, 1,702,537 arrests were made for drugs – more than any other crime category the FBI tracks.
Many people involved in addiction treatment say there needs to be a paradigm shift in the way we treat drug users in this country and around the globe. A new state commission is looking at ways to expand treatment options and availability. The use of drug courts has expanded in Oregon and some countries are experimenting with decriminalization as a way to get more people involved in treatment.
Portugal, for example, has no criminal penalties for user amounts of any drug. For 10 years now, their use rates have remained steady, actually declining for adolscents, while more addicts have been admitted to treatment. 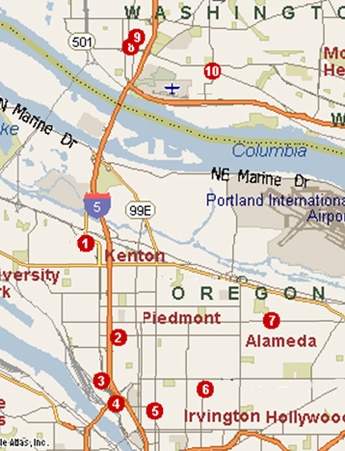 In Portland, there are other obstacles. For example, after the 14-day stay and a referral to a treatment facility, how do Antoniskis' patients do? Like many in the treatment field, he can't track them.
"In an ideal world we'd do it," he said. Follow-up depends largely on self reporting. Providence just doesn't have the staff power, he says.
Although they refer their patients to a variety of treatment facilities, many are sent to their sister hospital, Providence St. Vincent.
Michael Hollen, LPC, team leader for outpatient chemical dependency services at St. Vincent, operates the outpatient program for about 135 people, aged 19 to 72, split evenly among the sexes.
The program is generally divided into two groups – intensive and non-intensive. The intensive patients attend sessions more often, may meet one on one with a counselor, as well as group sessions, and may need to set shorter-term goals to stay sober. The program is tailored to each patient's problem and level of need.
"It's driven by the observed risk and the potential risk," Hollen says.
As patients figure out their plans and grow healthier, they attend fewer sessions, Hollen says. Most patients attend 10 weeks of treatment, which Hollen considers a bare minimum.
"It's significant for long term outcomes," he says. "90 days is about how long it takes to get the brain clear."
Measuring outcomes for Hollen, like Antoniskis, is difficult. Hollen's yardstick for success comes mainly from a patient's progress while attending treatment sessions. Once a person stops coming to the sessions,

it's next to impossible to determine their level of sobriety and functionality.
"We used to have an aftercare group, but we discontinued it several months ago," he said.
Of the 500 to 600 patients treated at St. Vincent every year, only about 8 would show up to the free alumni sessions.
Like others who treat addiction as a chronic disease, Hollen says ongoing therapy or group sessions – such as a 12-step program – is recommended to patients. For those who can manage the disease, ongoing treatment may not be necessary. But for others who fall off the proverbial wagon, the answer of continuing care is a bit less clear.
"Do they come back for a booster shot?" asked Hollen.

Across town at the Quest Center for Integrated Health, Chaela Manning is reporting a completely different level of post-treatment participation. Focusing mainly on gay, lesbian and HIV positive patients, the Quest Center conducts its therapy sessions a bit differently than Providence.
Using acupuncture, gender-specific and co-ed groups, Manning's 20 patients "get as much treatment as they need, not as much as they want."
Many of her patients are also homeless and unemployed. Forming community and friendship around Quest's treatment program is very important to an individual's success rate, she says. Despite having a mix of races and cultures – from African Americans to Whites to East Indians – Manning says they regularly see their former patients at community events.
"We do follow-up in a year," she says of the two-year program. "We haven't done it because we see them everywhere."
Because of funding, Manning can't take everyone that comes to Quest. She will, however, find another program for everyone she has to turn away. While speaking with The Skanner, she received a note from the front desk. The man leaving the note wants a call back immediately.
"I can't call him yet, because I don't have anything to offer him yet," she says, looking at the note. The patient is an alcoholic, medically fragile and she can't find a place for him elsewhere.

The Problem and Solutions

For Manning, increasing the success rate of treatment depends on accessibility of care.
"There's a small window where clients realize, 'Oh my God, I'm going to die I'm so miserable,'" she says of the "Treatment on Demand" model. "If we lose them, sometimes we lose them for good, or they come back and they're even worse than before."
Dr. Antoniskis says the number of providers of addiction treatment has plummeted in recent years, leading to out current situation – every time there's an opening in a program, especially for a charity slot, it is quickly filled.
Insurance is another barricade. Patients who relapse are often denied coverage. Antoniskis says others will treat a blood infection of an IV drug user, but refuse to treat the underlying addiction.
The mission of the state's new Alcohol and Drug Policy Commission will be to find the best answer to this problem.

In Oregon, Attorney General John Kroger helped form the Alcohol and Drug Policy Commission two months ago. With only two meetings under its belt, executive director Mary Ellen Glynn says the commission will set out to form a better system of drug and alcohol treatment in the state.
"I think it's cost effective for the state to look at treatment and prevention before it becomes a problem of addiction," she told The Skanner.
She says the treatment of an addiction disorder can be a long term process that depends on many different factors. Finding successful programs will be part of the commission's goal.
But that can be tricky. Looking at Portland, the treatment delivery system is not simple. It's fragmented, expensive and many providers are unable to track the long term success rate of their patients.