By Brian Stimson of The Skanner News
Published: 26 October 2009 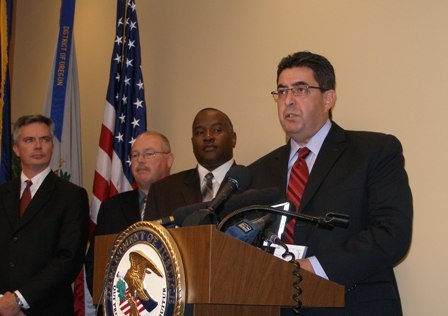 At a news conference Monday, members of the multi-agency Metro Gang Task Force displayed the guns and illicit drugs seized in the arrests of more than 19 alleged gang members.
During operation "Gang Strike," police arrested the alleged leader of the gang-affiliated cocaine distribution network, James Yoakum, along with two of his sons, Jaricho Yoakum and Lonnell George last month. Over the weekend, investigators arrested 21 others allededly involved in the conspiracy. Indictments were handed down Monday afternoon in the Federal Courthouse in downtown Portland.
Police say Yoakum was using the well-known Northeast Portland Barbecue restaurant, Yam Yam's – where he worked — as a way to launder the proceeds from the cocaine business. No drugs were found in the raid on Yoakum's home. About $60,000 in cash was found in a safe at Yam Yam's.
Kent Robinson, acting U.S. attorney said this was not the end of the investigation and more arrests were likely.
Yoakum's arrest occurred when investigators intercepted a phone call after Lonnell George was involved with a shooting on Killingsworth Street and Haight Avenue, 10 feet from The Skanner's office, in late August. The shooting left a rival gang member wounded. George is being charged with assault, unlawful use of a firearm and attempted murder.
FBI Special Agent Arthur Balizan said thousands and thousands of staff hours were logged during the investigation. It was unclear how much money law enforcement spent investigating the case.
"What we sought to do with this investigation is find the leaders of the drug trade," Robinson said. "The number of weapons and amount of drugs you seize at any moment in time doesn't represent the true scope of what you've done. We've taken a significant step here in getting at some of the leaders of the drug and violence in Portland." 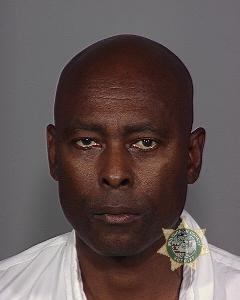 As with numerous other drug arrests that involve large amounts of drugs, money and cash, an arrest usually means one thing in the drug business – a job vacancy. Unlike every other major trafficker's arrest in the history of the War on Drugs, Robinson didn't know if someone else would move in to distribute large amounts of cocaine in Portland.
"It's hard to speculate," he said. "I would hope that others who've seen the success of this law enforcement operation would be reluctant to fill the shoes of those who are in custody now and who we hope to put in jail for a very long time."
Will the disruption of the drug ring lead to battles over the drug business territory?
"We certainly hope not," Robinson said. "The message here is very different from that, we've got our hands on this problem and we're going to be addressing it if it resurfaces."
He said that by targeting people at the top of the drug distribution network, they hoped to end the availability of cocaine and drug prohibition related violence in the tri-county region.
Rob Ingram, director of Portland's Office of Youth Violence Prevention, said a high publicity bust like this can actually have the opposite effect on certain gang-affiliated youth.
"It becomes more of a promotion than a deterrent," he said. "They see two Land Rovers, $60,000 in cash, all those drugs and guns and think, 'that's what I want.'"
Seeing many of the defendants facing decades behind bars for the drug crimes doesn't deter them, he says. For more thantwo decades, the federal government has been sentencing drug dealers to long mandatory minimum sentences, often sending people to jail for life without the possibility of parole. Over half a million people have been incarcerated in federal prisons since the Anti-Drug Abuse Act was passed in 1986.
Although the law enforcement officers that targeted the cocaine business organization were specifically targeting gang-related drug activity, Ingram said labeling these people as gang members may be a bit of a red herring.
"It's profit," he said.
Reports from police allege that the elder Yoakum did business with people alleged to be associated with the Bloods and Crips street gangs. Ingram isn't surprised. In his years as a gang outreach worker, he's seen members put down rivalries and factions in the name of the almighty dollar.
"This isn't about red or blue, it's about green," he said.
Looking at the never-ending number of busts, jail terms and media presentations featuring piles of drugs and guns, it prompts the question: will there ever be an end to the cycle?
"No," he said. "The reality is that drug dealing's profitable and relatively simplistic."
He said you have to offer something for a career criminal to pick up instead of telling him to put down their drug dealing career.
Kate Desmond, a Department of Community Justice Manager for gang-involved adults, says the department has been using a multipronged approach to combat the revolving door of criminal gang involvement. They offer people on parole or probation opportunities for education at the Londer Learning Center, job training at programs such as PCC's ETAP and drug treatment sessions. Many gang members she says don't use the drugs they sell, but do drink alcohol and smoke marijuana, which can interfere with their ability to get a job and further their education.
Since July 2008, the department has practiced what is called "Effective Sanctioning."
"If someone's in school and you put them in jail for 45 days for being out past curfew and drinking," she says. "Then they'll likely have a harder time getting back in school and paying off loans."
She said recidivism rates have stayed steady since the program has been in place.
If convicted, those arrested in Operation Gang Strike won't have the benefits of state incarceration. Federal prisoners are moved around the country, many unable to keep ties with family. Desmond says a federal conviction can affect how well a person reintegrates into society compared to state prisoners.
"It will have an impact," she said. "Gang members don't like going to federal prison."
Check back to www.theskanner.com for more updates.