By The Skanner News
Published: 14 September 2009

More than 25,000 people enjoyed free rides Saturday Sept. 12 when TriMet opened it's new MAX Green Line. Running from the Portland State University campus to Clackamas Town Center TriMet's fifth MAX line is 8.3 miles long. PSU is the top destination for TriMet riders.
TriMet has been working to build the $575.7 million project since early 2007. Federal funds picked up about 60 percent of the cost of the line; the rest was paid for by the city of Portland, Metro, TriMet, Clackamas County and the Oregon Department of Transportation. The Green Line began regular service Sunday with trains running every 15 minutes most hours, and every 20 minutes in the early morning and late evenings.
TriMet held a party to recognize the contributions of minority contractors Sept. 8. 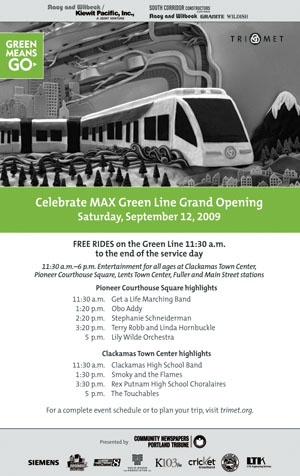