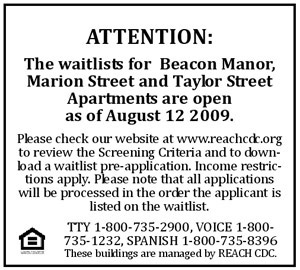 Longtime legislator Margaret Carter announced this week that she will be resigning from the Oregon State Senate in order to become deputy director of Human Service Programs for the Oregon Department of Human Services. First elected to the Oregon House in 1984 and elected to the Senate in 2000, she was the first female African American member of the Oregon Legislature and first female to hold the post of Senate President Pro Tempore.
Over her 25-year career, Carter has had many accomplishments, the biggest being her longevity, she says.
"It has a place in success," she told The Skanner. "People saw me as making a difference for all Oregonians and saw me as trustworthy."
She says her first two major accomplishments in 1984 count as the most memorable – South African Divestiture and legislation marking the Martin Luther King Jr. Holiday here in Oregon.
"Even those people not of African American descent … those people interested in social justice … celebrated the first two things we did in the legislature," she said.
She also counts as accomplishments her efforts with economic development in North/Northeast Portland and making sure people of color were adequately counted in the census and ensuring they were given adequate opportunities for government jobs.
Former Sen. Avel Gordly said Carter's accomplishment is grand.
"No one has served longer or worked harder to meet the needs of an underserved constituency, with the exemption being Bill McCoy," she told The Skanner.
Gordly said Carter's commitment to education, in particular community colleges, is the "crowning part of her legacy."
"She understood that through community colleges, you meet the immediate needs of people who need skills and retraining," she said of her colleague.
Gordly said Carters ministry of music was also an inspiration to many.
There were also failures for Carter. Her failure to reform the revenue source for school systems is on the top her list. She says giving schools a stable source of funding would be a step in improving the system.
She also says the failure of a little known, controversial bill last session disappointed her. The bill would have allowed someone convicted of prostitution as a young person to work in the education system after the conviction was more than five years old. A person who had reformed their life and wanted to work as a teacher was prevented from doing so because of the choices they made when they were young, she said.
During her first year at the DHS, she plans to visit each of the state's field offices to figure out where improvements could be made. She also plans to fight disproportionalities in the foster care system – a major goal, too, of Rep. Chip Shields, a frontrunner in the contest to win Carter's Senate seat.