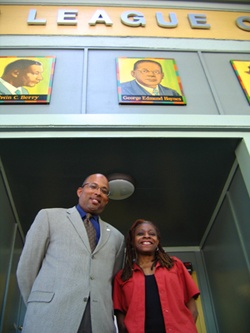 For the first time in 17 years, the Urban League of Portland has released its long-awaited look at how African Americans are faring in health, housing, education, prison, employment and other areas.
Unfortunately, "The State of Black Oregon 2009" shows not a whole lot has changed for the better.
"It's not looking for a handout, it's looking at how we can solve some of these problems together, specifically problems perceived as systemic," said Marcus Mundy, president of the Urban League of Portland. "Not every problem in the Black community is individual, some we're combating systems, combating mores and combating history."
The effort mirrors the National Urban League's annual milestone of statistical research, "The State of Black America," but with a local focus.
In each section of the report, the Urban League employed professionals in their given field to write essays explaining problems and formulating workable solutions. There are also case studies from individuals – some well known, some not – that look at the real life struggles Black men and women go through to succeed. To download the report, visit www.ulpdx.org. You can also order a free paper copy of the report by calling the Urban League at 503-280-2600.
"It's going to take people of good will to see where there are still injustices and unfairness in the system to deal from a systems approach," said state Sen. Margaret Carter, who was one of the many contributors to the report. "For me, I'm going to try to work and keep people out of prison. There's a lot of prevention work to do. We must look at our community. We have got to realize that 45 percent of homicides in this city is black on black crime. So we're all in this together and we have to work through it together."
Eighty percent of Black Oregonians still mostly live in the Portland Metro area, although far fewer live in North Portland today than they did in the early '90s. The period of gentrification has seen the number of Black Oregonians living in North Portland drop from 55 percent to 23 percent.
While Black populations have spread across the metro area, the number who actually own their home hasn't increased much. In 1990, 28 percent had a mortgage and 9.8 percent of the total Black population owned their home free and clear. The average from 2005 to 2007 was 29.3 percent with a mortgage and 7.6 percent who owned free and clear – and these numbers were taken before the housing bubble burst. Compare that to 68 percent of Whites who either have a mortgage or own their own home. And the rate of those families paying more than 30 percent of their income on housing is also lopsided – about 55 percent of Black-headed households and 35 percent of White-headed households spent more than is recommended on housing.

There are many other barriers to homeownership and an increased standard of living outlined in the report. Education achievement among Black students is unacceptable with 75 percent of Black 10th graders not meeting math standards and 60 percent not meeting reading standards; Black-headed households are more likely to earn less than their White counterparts; Blacks are still overrepresented in the juvenile and adult prison systems, leading to an increased probability of poor outcomes for children of incarcerated parents; health outcomes for African Americans are considerable worse when compared to Whites; and Black children are much more likely to end up in the child welfare system that White children.
"It's a reminder that we have much work to do. The African American has been and continues to be Oregon's most precious resource," said Marcus Mundy, president of the Urban League of Portland. "If we're not using this resource wisely, we're not getting the most out of our state as Oregonians."
Mundy said the report should be read as a comprehensive assessment of how African Americans are faring as a group. It should also serve as a reminder that six months of a Black presidency doesn't immediately wipe away hundreds of years of enslavement, forced poverty, institutional discrimination and racism.
"Above all, this report does not say woe is us, it does not say we are victims, it says this is the base line, this is where we're beginning again," he said. "We have a high level of responsibility for our actions

The report targets seven indicators of prosperity, with tangible solutions to improve each one from qualified and respected professionals. Despite a variety of solutions, laws and societal changes over the last 17 years, problems remain deeply seated. It is the hope of the Urban League that this comprehensive report will provide lawmakers and community leaders aware of different problem-solving techniques.

Economic Development: On the high rate of unemployment.
"To reduce these disastrously high levels of unemployment, first we have to recognize that they're a problem. … many African Americans have achieved their dreams here. But we must recognize that the historical legacy of housing, school and occupational segregation has resulted in a pattern of "cumulative causation" that perpetuates the cycle of unemployment, poverty, and low educational attainment. … sustained efforts for more and better jobs require a critical mass, a momentum that is hard to attain because of the small size of the African American population and its historic isolation within spatial boundaries." – Dr. Karen J. Gibson, Nohad A. Toulan School of Urban Studies and Planning, PSU.

Education: On poor achievement and graduation rates.
"There is a fundamental flaw when one uses only multiple choice test items to measure learning. … there must be a call for a new pedagogy and multi-dimensional measures that allow schools and the greater society to honor and value what students bring to the learning environment. … All inequities, including lower expectations for African Americans, over-identification for special educations and under identification for Talented and Gifted must be addressed and subsequently eliminated." – Carolyn Leonard, Compliance Officer, Portland Public Schools.

Criminal Justice: On the predominance of prison and the cost to society.
"The Oregon Department of Corrections uses a large share of the state's budget … What if we spent as much on social services as we do on prisons? We could focus on education and generating meaningful jobs instead of sequestering as many African Americans for longer and longer stretches of time … We need to resist increasing mandatory minimum sentences and explore prison alternatives instead. We can and must take creative steps to change the terribly high human and economic cost Oregonians are now paying via the criminal justice system." – Dr. Robert D. Thompson Jr., OSU, Department of Ethnic Studies.

Housing: On affordability and ownership.
"There are a couple of places where (tax money) needs to be spent, one is on increasing homeownership, second is on increasing capacity for nonprofit organizations that work with low income communities, and third is preservation of Section 8 projects that are expiring in the next 10 years. … Individual Development Accounts provide incentives to individuals who want to save toward a home … we encourage potential homebuyers to attend home buying classes … OHCS offers affordable loan products to first time, lower income homebuyers." – Dr. Victor Merced, director of Oregon Housing and Community Services.

Health: On disparities and ill-treatment.
"Supporting healthy individual behaviors helps to counteract inequity in our community. However, these behaviors are shaped by social and physical environments, and by what community leaders do, or fail to do. … policies must target specific inequities and be developed in partnership with multiple members of the communities most impacted by disparities." – Tricia Tillman, Multnomah County Health Department.

Environmental Justice: On polluted minority communities.
"The Environmental Justice Task Force … reports directly to the governor about environmental justice concerns and the progress of state agencies toward meeting environmental justice requirements. Organizations like the Urban League of Portland have launched campaigns to identify and clean up Brownfield sites. Groundwork Portland is a land trust that uses a community-first model for redeveloping Brownfields and connecting green spaces." – Kevin Odell, Organizing People, Activating Leaders (OPAL) and Jill Fuglister, Coalition for a Livable Future.

Child Welfare: On differential treatment.
"Promising practices include family group conferencing. This increases the family's engagement and voice in the decision-making process. Other "good practice" models use effective relative and family engagement to find and support suitable kin and identify preventive and sustaining services that can be tailored to the family's needs, including cultural needs." – Angela G. Cause and Kory Murphy, Oregon Department of Human Services.

Civic Engagement: On high participation.
African Americans are among the most politically active and community engaged of all groups in Oregon. The African American community consciously practices leadership development through churches, civic organizations, sororities, fraternities, schools and clubs. Some people point to changing demographics in Oregon as an indication that the African American community is losing political power and visibility. … a great deal of talent is being cultivated and is waiting in the wings." – former state Sen. Avel Gordly, associate professor, Department of Black Studies, PSU.