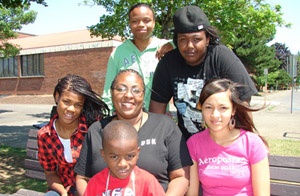 As Tonya Dickens catches up with paperwork in the Brother's and Sister's Keepers office at the King Neighborhood building on Northeast 7th Street, she's surrounded by neighborhood children watching Michael Jackson videos. This morning, Dickens was at Portland's Gang Violence Task Force meeting, discussing how to end the recent outbreak of gang shootings.  Tonight she'll be on the streets, moving from hotspot to hotspot in an effort to promote peace and help young people stay out of trouble. If trouble breaks out anyway, Dickens could be up all night -- as she was last Wednesday. She doesn't punch a clock or tally her hours. She is on call 24/7. And that's what she wants.

"It's not just a job; it's not a paycheck," Dickens says. "We're not just a program; this is a lifestyle. We do this because we believe in it. We're trying to save lives here."

Now in her late 30s, Dickens has been working with troubled teens and their families for 16 years. She started out as a volunteer with Emmanuel Temple, worked with the Northeast Coalition for 13 years and started Brothers' and Sisters' Keepers 10 years ago. BSK, as she calls it, became an official nonprofit in 2002. Today it's one of the five programs contracted by the city to reach out to "at-risk" youth – teens with a record of gang involvement or likely to become victims or perpetrators of violence.

"There are a lot of circumstances affecting these young people," Dickens says. "These kids have never had the opportunities."

Five young people have died in Portland in the last 12 months because of gang violence, and non-fatal shootings have increased. That's why, earlier this year, under the leadership of City Commissioner Dan Saltzman, the city decided to focus its efforts on outreach programs that work directly with young people in danger of becoming perpetrators or victims of violence.

"We are cutting edge," says Tom Peavey, a former police officer who now helps form policy at the city's Office of Youth Violence Prevention. "We're not behind anyone in this process."

The city has dedicated $450,000 for outreach. That's far short of the $8 million Seattle is putting into its new youth violence prevention program – which is offering a wide range of prevention and treatment services to about 800 young people considered to be most likely to become caught up in gang activity and violence.

Advocates are quick to point out that the figures can't be compared directly, because other youth programs -- many funded through Portland's $13 million Children's Investment Fund -- support mentoring, after-school and early childhood intervention programs targeting Portland youth.

In fact, Seattle is looking at creating a gang violence task force similar to the coalition operating in Portland. The task force brings together everyone working on gangs and violence – from police and outreach workers to churches and community advocates. The team approach helps avoid duplication of services and made it easier for law enforcement and outreach workers to partner successfully.

"When I speak to people in other cities they are amazed at what we do here," Dickens says. "But this is the only way I know how to do it."

Outreach programs have been successful in reducing violence in cities such as Boston, Chicago and Cincinnati. Rob Ingram, director of the office of Youth Violence Prevention, says they are part of the solution – along with the prosecution and incarceration of violent offenders. But outreach and law enforcement alone, can't solve the problem in the long term. Ingram is talking from experience. Like Dickens, he grew up in Northeast Portland, where he saw the impact of gangs and violence up close, and attended too many funerals. "Gangs are a product of an unhealthy society," he says. "If we don't take care of our children we know something will happen to them… and we know it won't be good."

Ingram doesn't let parents off the hook, urging them to know where their children are and who they are with. But other adults also must step up, he says, quoting President Kennedy, saying, 'Ask not what your country can do for you, but what you can do for your country.' President Obama is now asking for that same commitment, he says, while thousands of children in Oregon need mentors.

"Adults have to offer service," he says. "If they don't, we're done. The biggest issue we have is for someone to be there for the kids."

"We (Portland) might be ahead when it comes to coordination, but we are way behind in other ways,' she says." Inequalities in education, employment, housing and opportunities of all kinds are hurting poor and minority youth more than everyone else. And lack of resources makes her job far harder.

"How can we expect them to make good choices when they are jobless, moneyless and homeless?"