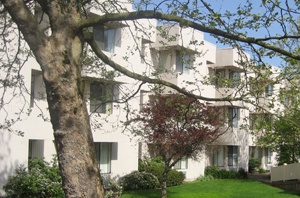 The residents of Walnut Park can breathe easier this year. The elderly and disabled tenants of the 38-unit complex were facing a possible eviction next year when federal Section 8 housing contracts were set to expire.
REACH Community Development stepped in to purchase the apartments and guarantee the extension of the Section 8 housing contract, which supplement the cost of rent for low-income and disabled people.
Although one low-income housing project has been preserved, Walnut Park represents one of thousands of subsidized housing properties whose federal contracts are expiring in the next few years. Many of the properties that originally obtained low-income subsidy programs in the late 70s and early 80s are expiring. Depending on the property and rental market, many property owners could turn the units into market rate housing or sell it outright to another owner.
"No one organization could begin to touch how many projects are coming up for renewal," says Jessica Woodruff, housing development manager for REACH.
The organization Preserve Oregon Housing tracks nine "at-risk" subsidized apartment complexes in Multnomah County that represent 670 individual units.
The state of Oregon and the city of Portland is undertaking a plan to retain as many affordable housing units in the city as possible. For REACH's part, the nonprofit has purchased four low-income properties that were facing expiration – two Section 8 properties and two Low-Income Housing Tax Credit properties.
Beth Kaye of the city's Bureau of Housing and Community Development, says city and state officials are part of a joint effort to preserve affordable housing. The city has an acquisition fund to specifically purchase Section 8 properties so a suitable buyer can be found. The Network for Oregon Affordable Housing helps preserve housing on the state level.
Kaye says the city will only work with "mission-based nonprofits" on these properties.
"The state will work with private owners," she said. "In Portland, we're more hardcore."
Part of the reason the city is refusing to sell Section 8 properties to private landlords is commitment. With a nonprofit, the city can guarantee 60 years of affordable housing.
With a down housing market, Kaye says acquiring expiring Section 8 properties isn't as worrisome as it was several years ago. Even so, during the height of the housing boom, the city was able to negotiate the acquisition of Clay Tower, the city's first Section 8 housing building. Instead of making maximum profits off the building, Harsch Investment Properties sold the 17-story apartment building to Cedar Sinai Park, a nonprofit with ties to Portland's Jewish community. The building now has a 20-year renewal contract to provide low-income housing to the elderly.
"Preservation is the number one priority," Kaye said. "It's such a good deal for everyone."
HUD spokesman Lee Jones says his agency isn't too worried about a large loss of affordable housing over the next four years.
"In Northern Virginia, four years ago, it was opt-out time," he told The Skanner. "What drives the decision is the market."
Jones says New York, San Francisco, and Washington, D.C. are still markets that HUD watches closely, but Washington state and Oregon are not considered at-risk markets. He said the Northwest HUD office deals with about 700 contracts, one of which is currently opting out of a renewal contract.
Although Kaye says HUD has been a great partner in extending Section 8 contracts, she believes that by not dealing with the properties on an individual basis, problems could arise.
"When you have a wave of these coming," she said. "it doesn't take a genius to think there might be a more sane way to do this."
Although the market for high-end condos has tanked, there is still concern that a broken credit and bond market could hinder efforts to recover these properties. And simply giving low-income people housing vouchers is a solution no housing advocate wants to see.
If a building-wide contract is cancelled, most residents are given a voucher for a HUD-certified rental property, says Jones.
These vouchers are taken to a private market landlord. It guarantees rent is paid, even if the tenant loses his or her job. But if a person with a voucher can't find an apartment after the voucher expires, they lose their shot at subsidized housing, says Shelly Marchesi, a spokeswoman for the Portland Housing Authority. Yet despite income guarantees, many landlords still won't rent to tenants with Section 8 vouchers, says Marchesi. They say the inspection process takes too long; that the paperwork is too complicated; and they perpetuate the stereotype that poor people damage property at a higher rate than everyone else.
The Housing Authority of Portland launched a program last month that aims to entice landlords to take part in that voucher program. The Section 8 Landlord Guarantee Fund insures properties against more than $1,000 in damage for the first two years of a tenant's residency.
In order to preserve Walnut Park Apartments for the seniors and people with disability that live there, REACH will have to undertake several million dollars in renovations. Kaye says this same challenge faces many buildings with expiring contracts.
"It is in pretty good shape overall, but everything has pretty much reached the end of its useful life," says Woodruff. "We do intend to bring it into the current era."
Residents will be moved temporarily into a hotel while their apartments are given a $60,000 overhaul – new kitchen and bathroom included. The outside of Walnut Park will be given a facelift too – new siding, roof and grounds. Woodruff says the architect and contractor are focused on bringing the aging building into an environmentally sustainable future. She hopes the interference for residents will be brief and worth it.
"To the tenant, it should be seamless," she said.