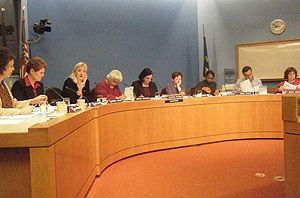 With a last-minute infusion of more than $150,000 in contributions and grants -- and a rapid reorganization of its finances -- the Leadership and Entrepreneurship Public Charter School failed to score an easy turnaround against a shutdown proposal at a packed Monday night meeting, but put members of the Portland Public Schools Board on the record as supporting their eventual charter renewal.

While the board voted 6 to 1 to close LEP this year, each member expressed confidence that the school's charter would be renewed on appeal within 30 days.

Before the vote was over, LEP supporters, board members and district staff turned the two and a half hour discussion of charter school renewal into an examination of how state funding statutes have systematically penalized the racially and economically-diverse students at LEP, while rewarding more affluent schools.

Martin Gonzalez, who serves Zone 4 in North Portland, voted in favor of LEP, he said, to acknowledge the school community's effort to address the board's concerns.

One of three charter schools up for renewal by the district this week, LEP was the only one facing a negative recommendation by the board's evaluation committee, which recommended closure on the basis of "financial instability."

The other two schools, Portland Village Charter School, and the Emerson Public Charter School, earned renewal votes even as their representatives testified to their failure at achieving diversity in their school communities.

An advisory committee of school board members ruled March 12 that, academically, LEP is a model of diversity and a successful laboratory of innovation in business and leadership education.

The school's bid for charter renewal was marked for rejection by the committee because district representatives said it lacked proper business management, hadn't made required Public Employees Retirement System contributions, had an outstanding debt to its landlord as well as unpaid bills.

School staff disputed the district's report, and argued that hundreds of thousands of dollars in state funds earmarked for foster students, low-income students and other school operations had not been passed through to LEP's coffers.

However, the hundreds of school supporters at the meeting – including scores of teens – maintained an overall atmosphere of respect, with just a little bit of attitude and occasional outbursts of wall-shaking applause.

At the onset of LEP's presentation to the board, the school's principal, Brenda Fast Buffalo Horse, presented a packet of financial information that board members said they didn't have time to examine before their vote.

"I'm here tonight to tell you that LEP has balanced our books and addressed the concerns that the Portland Public Schools staff has shared with us," Fast Buffalo Horse said.

"Reports have been submitted to PERS and released for payments through December 2008, we have cash to fully pay PERS to date and are waiting for them to process these payments through our account.

In addition, the nonprofit group E3, in conjunction with the Meyer Memorial Trust, recently gave the school a $50,000 grant; Fast Buffalo Horse added that an unnamed local business had Monday night given her a check for $50,000.

LEP has renegotiated its terms with its landlord, developed a new budget including four different plans for next year's expected state budget downturn, and set aside money to hire a new business manager and contract with an accounting firm, Fast Buffalo Horse said.

Also speaking on behalf of the school, LEP co-founder Adam Reid took board members to task for not maximizing the amount of state education money available to low-income, foster and special education students, which prompted Regan to call district charter school staff to the microphones and open the floor to talk about where the money goes.

That means the district, which administers all the state money given to charter schools, is allowed to keep 20 percent and five percent of that money, respectively.

While public schools are allowed access to state money for instruction to low-income, foster and special education students, district staff said state laws do now allow that money to reach all the students who would otherwise qualify if they attend charter schools.

The issue of funds disbursed by the state for low-income students became a source of contention, as several board officials revealed that they didn't know exactly how that money is awarded, with board members Gonzalez and Sonja Henning pressing for answers from staff.

District staff testified Monday night that "poverty money" is awarded to each Portland charter school as if 17 percent of its student population were low-income, because state law fixes that amount based on the overall poverty rate of the district as a whole.

Board members and staff said that, while LEP has a low-income student enrollment of 65 percent, the district itself does not "pocket" that money.

Also controversial is funding for schools that enroll foster children; some 20 percent of LEPs students live in foster care.

District staff said Monday night that they had agreed with LEP to offer extra funds to serve foster children, the arrangements had not been completed, but that the district is still committed to making the money available.

Regan urged the LEP community to lobby state officials for a change in the charter school statute, which, she said, has never been altered since its adoption 10 years ago.

"LEP should go to the state and challenge that, and the PPS will support them," she said.

Henning, however, said that the district itself should take a more active role in addressing inequities in the state law.

"It's just as incumbent on us as it is on the school to change the charter statute," she said.

Regan agreed, adding, "It's time to look at some unintended consequences in the law."