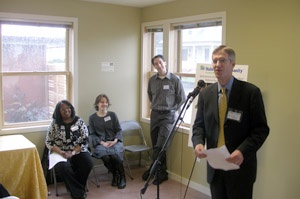 Of the 14 homes in Oregon that are registered as LEED Platinum – one of the highest ratings for environmentally sustainable building in the United States – none are considered to be affordable. That is, until now.

Habitat for Humanity unveiled two LEED Platinum homes for low-income people on March 31. The homes are located at 602 NE Webster St. and are being purchased by Janette Clark and the Alemayoh family with a no interest loan.

Steve Messinetti, executive director of Portland Habitat for Humanity, says creating an affordable home that meets LEED standards is no small feat. Actually getting LEED certification is costly and based on a point system.

"These homes were experimental for us," Messinetti told The Skanner. "With the rising cost of energy in the future, energy efficiency has got to be a part of affordable housing."

The homes were built with the natural environment in mind. Windows were positioned to allow for a cross breeze in the summer and made of fiberglass; rainwater is harvested from the metal roof in underground cisterns for on-site irrigation; and overhangs allow shade in the summer and sunlight in the winter.

For Janette Clark, a single woman who is legally blind, the home is a blessing, she says.

"I always knew I wanted to own my home," she said. "My new home was designed to accommodate my disability. I had several meetings with the architects and designers that would explore options for my special needs. It has dark colored wood on the cabinets, concealed lighting and contrasting outlets on the walls as well as extra outlets."

Clark, who is a social worker, says bright colors can hurt her eyes and make it harder to see. Being able to live in Northeast Portland, close to friends, family and public transit, make the home a ideal location for Clark, who will be moving in April 4.

The project was a collaboration between Habitat, Walsh Construction, Cascadia Green Building Council and Bank of America. Bob Walsh, president of Walsh Construction and Habitat board member, says he likes to measure how "green" a home is by the amount of its energy bills, along with local suppliers and materials.

"To be able to build affordable housing that gets LEED platinum is nothing short of phenomenal," he said.

He called upon the building community to step up their volunteerism during times of downturn.

"There's such a synergy between what we do as a business and how we can repay some of the generosity of the community," Walsh said. "As we approach these economic times, the combination of need for housing like this increases, but the availability of talent in the building community will increase. Why don't others step up and let's build more than one or two or three houses at a time, find a dozen general contractors and put the challenge out to them and see if we can build 12 of these."

For Habitat, land is a scarce resource, even if volunteers and the need for affordable housing continues to grow.

"Habitat cannot build a house until we have the land to build it on," says Messinetti. "This has become one of the biggest challenges for Habitat as we start to build more and more homes. Our first 100 homes were built in the neighbor surrounding this area. Now many of the families who live here can't afford to stay here."

In the near future, Messinetti says Habitat will plan on building to Earth Advantage, the local green building standard. Obtaining LEED certification on every project is a challenge he says, and there are many ways to build energy efficient homes using sustainable materials and methods that don't involve the federal standard.

Meanwhile, on a national level, the U.S. Green Building Council – the organization that certifies LEED standards -- has launched a major initiative at improving affordable housing. The grant-funded program helps offset the cost of fees associated with building a LEED-certified affordable housing unit.