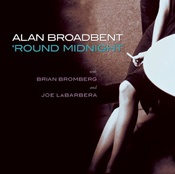 Alan Broadbent is one of those artists who seemingly has been around forever, but yet when one sits down to listen to this new release, the listener discovers a magnificent pianist who combines a highly refined melodic sense with an innate rhythmic approach.


Add the scintillating abilities of bassist Brian Bromberg — such as those heexhibitson"Die Vereinbarung" — together with the veteran drummer Joe La Barbera and wham, it's five stars. La Barbera's brush work on the tune has to rank him high in that delicate regard.


No tune has been played more wrongly than Thelonious Monk's "Round Midnight."However, Broadbent hits it dead center with his facile right hand reaching deeper than most to plumb out the song's true essence. No wonder he titled the CD after it. Again, Bromberg's bass adds its own luster. This is trio jazz at the sublime level! 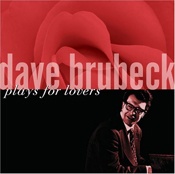 This release by pianist Dave Brubeck can go a long way toward letting in those folk who think Brubeck is either "Blue Rondo a La Turk" or "Take Five."


He begins with altoist Paul Desmond opening "You Go to My Head." Originally recorded in 1952, it uses drummerLloyd Davis and bassist RonCrotty. Brubeck turns "My Romance" into an excellent solo piano version. He lays the same treatment on "Our Love is Here to Stay." A refreshing touch awaits listeners when they hear tenor saxophonist Jerry Bergonzi join Brubeck on "I Thought About You."


Perhaps the prettiest love ballad is "For All We Know," with Desmond issuing one of his patentedvibrant solos. 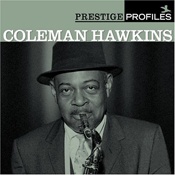 In the pre-John Coltrane years, it was a toss up between tenorists Coleman Hawkins and Lester Young as to who was king of that instrument.


These 11 cuts, taken from previously recorded and released material from the late 1950s and early '60s, state Hawkins' case eloquently. So not only do we get to hear the legendary Hawkins, we also get to hear many of his famous pals.
On "Since I Fell for You," Pepper Adams is on baritone sax;\Jerome Richardson, alto; and Idrees Sulieman, trumpet. Coleman's solo is strong and soulful. Pianist Ray Bryant is the same as he sets the table for Richardson's foray.


"Soul Blues" uses Kenny Burrell, guitar; Bryant on piano; Wendell Marshall, bass;\and\Osie Johnson, drums from a 1958 recording. Hawkins articulates the blues with passion. Other tunes include; "I Want to be Loved," "In a Mellow Tone," "Smoke Gets\in\Your\Eyes," "Greensleeves" and more.

Thara Memory was added to the Jazz Society of Oregon's Hall of Fame recently at the organization's annual First Jazz event in the Hilton hotel's grand ballroom.


After he led his newly formed (6 months old) band from\Pacific\Crest Community School through a couple of astoundingly performed tunes, he called out the society. Memory said the band, which already had won a national competition at the Berklee School of Music in Boston, was an example of what he could accomplish as a teacher if given students.


He requested that the society fund a minority music scholarship in the name of the\late\bassist-singer Marianne Mayfield. Society President Chuck Carpenter responded positively and funds totaling $611 were contributed. He told The Skanner a search is under way for a deserving young Black American interested in music.