Passinart Reprises 'A Sunbeam' at IFCC

It was nearly 9 years ago when PassinArt first produced the play "A Sunbeam." Now, with three actors from the original production returning to the stage, the controversial and emotional play about family, mental illness and tough choices is back. The play runs Thursdays, Fridays and Saturdays through April 25 at the Interstate Firehouse Cultural Center.
"A Sunbeam," by John Henry Redwood, tells the story of Celia Gilchrist, the mother of a 40-year-old mentally disabled boy, who must deal with a crushing problem: after her death, who will take care of her son Sol?
Director Trish Egan is leading the production of the all-Black cast, with veteran actors Shelley Matthews-Johnson as Celia, Kenneth Dembo as Sol and Jerry Foster as Celia's husband, reprising their roles. They are joined by Andrea White, Garfield Wedderburn and Kim Bogus. 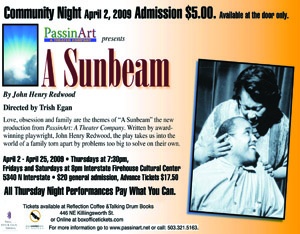 The play, written in the mid-1990s, was based partly on a true story from the playwright's own familial experiences. Egan says it is this realism, along with the solid prose, that makes the play so powerful and memorable. The last time it was performed, it had a profound impact on the audience.
"People left in utter silence," Egan said. "Which is usually rare even in dramatic performances. Many came back multiple times to see it. He's done it in such a way that it is real and honest."
Although the play is full of serious subject matter, Egan said there are bits of comedic release. But the main subject matter that the play deals with – mental illness – is something the cast took extremely seriously.
"It's a family in distress in so many ways," she said. "Mental illness is extremely taboo in the African American community. Because its taboo, there's no readily available community support system."
One of the main learning opportunities for Egan – a Caucasian female — was directing the all-African American cast.
"She's added a whole different dimension," Jerry Foster said. "Her outlook is different. It's a way of not just looking at it from a White perspective, it's a female perspective."
The cast and crew worked with a representative of the Avel Gordly Center for Healing to ensure they were approaching Sol's disabilities correctly.
"I'm really focused on making sure he's not coming off as a character," he said. "I want him to be very human. There are moments of real understanding and childlike innocence."
"A Sunbeam" runs from April 2 through April 25 at the Interstate Firehouse Cultural Center, 5340 N. Interstate Ave. Shows are Thursdays at 7:30 p.m., Fridays and Saturdays at 8 p.m. Admission is $20. Tickets can be purchased in advance by calling 503-321-5163 or by going to the www.ifccarts.org or www.passinart.net.