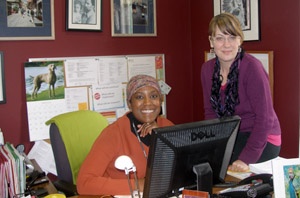 The Interstate Firehouse Cultural Center recently got word that $80,000 in city funding would be cut from their budget next year. As many other programs and departments also face cuts, the small arts organization says it is now figuring out ways to continue their programming.

"Like everybody, we were prepared to tighten our belts," said Adrienne Flagg, creative director for the IFCC. "What we'd been told was 5 and 10 percent."

What they weren't prepared for was a 30 percent drop in funds, especially since the new budget, if approved by the City Council, will take effect mid-summer.

Kimberly Howard, managing director, said that because of a miscommunication with the Office of Management and Finance, they weren't aware of their funding status until last week.

"They know we're going to advocate and know we have support from the community," Howard said. "It's a conversation, it's a proposal … If (city council members) are hearing from people about things in the community that aren't there, it gives them an opportunity to say, 'wow there's a strong feeling here that this should be there.'"

"But the people have to speak up about it," Flagg said.

The IFCC began in 1982 as a brainchild of former Parks director and city commissioner Charles Jordan. The arts organization was once fully funded by the Parks Department. The city now owns the building, although the IFCC is an independent nonprofit.

The IFCC not only serves as a performance space, but host art installations.

"We work in partnership with performing artists, we're not just a regular performance venue," Flagg said. "We're helping to support marketing and media that comes with them. We work at cross pollinating audiences, so that people from the Hip Hop Cabaret will come to Vaudeville Cabaret."

The economy is also affecting the ability to bring in shows. The theater season is usually booked a year and a half out. They're booked six months out right now. Theater companies don't want to commit to shows because many are unsure they'll be around.

And donations are also lower compared to years past.

"Some foundations have asked us to cut in half our request," Flagg said.

No other multicultural arts centers located in other cities are completely free from government subsidies, she said. And only 3 percent of income comes from individual donors. Big nonprofits – such as the OPB -- are around 60 percent.

But Howard and Flagg are confident they can survive. Failure is not an option, they said.

"We're a very lean organization, and people forget about that," Flagg said.

Flagg and Howard say the best thing supporters can do is call or write Mayor Sam Adams or Commissioner Nick Fish to voice their opinions.

For more information about the IFCC, visit their website at www.ifccarts.org.