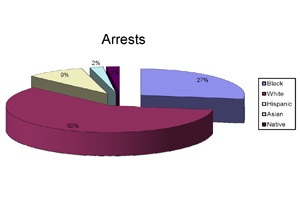 The Portland Police Bureau and the Independent Police Review each released reports last week that address racial profiling in Portland.
The two reports analyzed how bias complaints are handled and how the police department plans to reduce bias-based policing.
The Independent Police Review's Bias-based Policing Workgroup contains a review of bias allegations in "Disparate Treatment Complaints," and the Portland Police Bureau released its"Plan to Address Racial Profiling."
The Bias-based Policing Workgroup's report assessed a portion of complaints that contained allegations of bias. The report found, among others, that some practices of community policing are perceived as biased in communities of color; the IPR generally handles cases correctly; and that police officers' attitude factors heavily into bias complaints.
In their report, Portland police have proposed a number of policy changes that include expanded training and record keeping. Police Chief Rosie Sizer even makes an argument about why racial profiling is harmful to the police force.
Critics charge that while there are still many unaddressed issues, the reports indicate improvement in attitudes about racial bias by the government's enforcers.
Perhaps one of the biggest changes to the problem comes from Chief Sizer's definition of racial profiling: "The inappropriate reliance on race as a factor in deciding to stop and/or search an individual."
The definition – used as early as the decade-old Blue Ribbon Panel on Racial Profiling — has long been, "The use of race as the sole basis for justifying traffic stops or other police action." 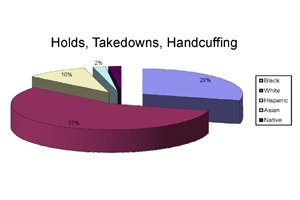 The police watchdog group Portland CopWatch would like to see something even more encompassing: "Any action that is based on race," said Dan Handelman, CopWatch director.
Handelman said he wants that definition used because of the prevalence of violence – or "force" as it is defined by police – against communities of color.
"There's no doubt that this report has a lot of good going for it," said Handelman, however, "Police use violence against people of color more than other people."
Statistics that Handelman obtained from Portland police show that African Americans make up nearly 30 percent of all use of force incidents. Only 69 percent of these incidents lead to an arrest. [Please see graph accompanying this article.]
Oregon Action's Ron Williams, who has been leading a racial profiling task force, says the bureau needs to reexamine two controversial, but legal, practices that were addressed in the IPR report – pretext stops and "mere conversations."
"These aren't conversations," he said. "These are investigations disguised as conversations. … No one in my community has the point of view that police officers engage in community policing."
Williams' opinion isn't isolated and some practices of "community policing" have already changed. Outreach proposals that sought to pair community mentors with officers have been "halted due to community feedback that this strategy would be perceived as a request for 'snitches,'" according to the bureau.
Chief Sizer is recommending tracking how many "mere conversations" lead to officers requesting a "consent" search. Legally, anyone who is asked their permission to be searched has the constitutional right to say no, although many studies across the country have revealed people don't feel they have an option. 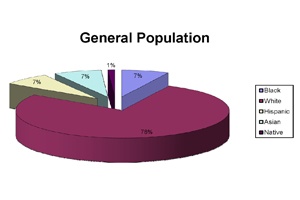 Pretext stops are another source of objection. A pretext stop is often for a minor violation. One of the most common is for failure to signal 100 feet before a turn. In response, Chief Sizer has recommended mandating officers either give a ticket or warning for every traffic stop they make. In her report, Sizer acknowledges this policy could have negative consequences and wants it monitored.
Handelman said he has deep concerns about it, but it could provide a paper trail and give official justification for the stop. Couple this with Sizer's plan to mandate that officers give out their personal business cards during a stop and it might result in more meaningful stops.
"I'm hoping it means they'll be more congenial," Handelman said. Many of the cases reviewed by the Bias-based Policing Workgroup indicated that some officers were rude, insensitive and "looked down upon" non-English speakers.

For this and other reasons, Williams and Handelman would like to see some sort of individual officer accountability.
Williams said patterns of behavior from a single officer tell more about the racial profiling than a single incident. For that reason, Williams wants to see a breakdown of data – complaints, stop patterns, search patterns, etc. — from specific officers, as well as accountability for individual officers.
There are concerns, shared by critics and supporters, that officers working in communities of color – and would therefore stop more people of color — could be singled out as profilers.
IPR Director Mary-Beth Baptista says she will support the bureau's attempts to remove internal barriers that have prevented bureau leadership from tracking patterns of behavior.
"We recognize the importance of looking at repeat behavior," she said.
Chief Sizer is examining a change in public records law that would exempt officers' names from disclosure if more accurate depiction of stop and use of force data is to be collected. The IPR is able to view officers' names in connection with complaints, but doesn't want to make those names public, just as Baptista wants to keep the names of complainants out of the public eye.
"Anyway we can address that issue (of repeat behavior) without compromising officer or community safety (we will support)," Baptista said.
To download and read the full reports, visit www.portlandonline.com/auditor and www.portland-police.org.