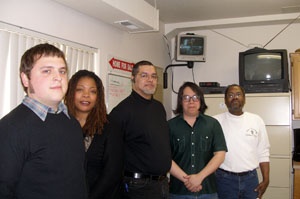 Undergoing a host of classes and projects in 2009, Sabin Community Development Corporation is showing no signs of slowing down since its founding in 1991.
Starting this year, Craig Fondren is overseeing a team that will take Sabin's multimedia classes to a new level.
"Connectivity is something we've believed in since our inception," Fondren told The Skanner. "When I came here, this neighborhood was not connected. I wanted to be able to educate people … If I can get you interested in technology, I can get you interested in investing in property, and in moving your family up and out."
Fondren has taken on several subjects that used to be the purview of the public school system – music, writing, and digital video and audio production. All the classes are free, registration occurs at the first several sessions.

Longtime Oregonian Columnist Renee Mitchell will be teaching writing classes for Sabin. The literary Renaissance woman said she didn't want to follow in the footsteps of other professionals who have left their primary employers.
"I have the time and interest to invest back into the community at a real grassroots level," she said. "I want to teach kids how to write better … I want to see this community be the best it can be …"
Growing up, Mitchell says there weren't many grown-ups encouraging her to embrace words as a form of empowerment.
"I didn't have anyone trying to mentor me," she said. "Words have power, not only the written word, but the words we speak."
As evidenced by her long resume as a professional speaker, poet, playwright, songstress and journalist, she says that being able to use language effectively has opened many doors in life. Registration for Mitchell's writing classes will begin at 1 p.m. on Saturday, Feb. 7 at Talking Drum Book Store and Reflections Café.
Fondren says he's really  trying to create different opportunities in the community. One of Sabin CDC's main roles is to provide affordable housing in the Alberta neighborhood, and their residents are always first notified of upcoming classes. Fondren says he often distributes fliers at bus stops, at the mall – anywhere he can reach people.
Another program lost from many schools is music. Steve Bozzone -- a recent transplant from Philadelphia – will be teaching a digital music class for young people.
"I want youth to be heard more," he says, himself a perfect example a the age of 26. "I deserve to be heard. But you have to know what you're talking about."
His music production class -- which begins on March 4 at 3:30 p.m. at Talking Drum – will take young people with little to no musical background and teaching them the basics of song structure, digital production, publicity and marketing. By the time each student has finished the class, they should be walking away with one or two songs under their belt. The class will also enable students in Mitchell's class to create podcasts of their work.
Local video and audio production teacher Vo McBurney will then be instructing production classes covering the basics of editing, lighting and production. Students engaged in each level of the multimedia curriculum will have the ability to write and record video and audio for a polished product. His classes will begin March 24 at 3:30 p.m. at Talking Drum.
The video production classes will continue at Sabin's new, shared workspace on the corner of Martin Luther King Jr. Boulevard and Wygant Street. They will be sharing the space with Portland Community Media and Fondren says once the space is up and running, Sabin will be offering job training classes for young people with the help of volunteers from the Oregon Employment Department.
The future holds many possibilities for Sabin. For the summer media project, Fondren will be looking for 10 to 15 students to assist in creating the follow-up to the award-winning, student-produced documentary "Vanport: The Survivor's Tale."
For more information about the programs run by Sabin CDC, visit http://sabincdc.org, or call 503-287-3496.