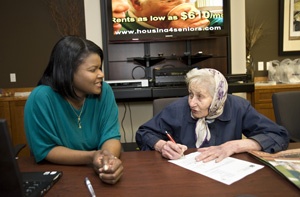 Nonprofits, government agencies and corporations have joined the nationwide network of organizations dedicated to getting the word out about the TV Converter Box Coupon Program and the historic transition from analog to digital television. Blacks at Microsoft (BAM) and other Microsoft employee volunteers are helping to educate the senior community about the upcoming transition to digital TV. On Friday, Microsoft employee volunteers will host a TV Converter Box Coupon Program Sign-up and education event at different locations across the U.S. This event will help ensure that consumers apply for coupons and are prepared for the transition. One of the biggest changes in television history is only 2 months away. Consumers that rely on free, over the-air television reception with an analog TV, are at risk of losing their TV signal after February 17, 2009 if they do not act soon. After February 17, 2009, all full-powered television stations will broadcast only in digital. Consumers who plan to keep their analog TV set that uses rabbit ears or a rooftop antenna – will need a converter box. The Federal government is offering all U.S. households up to two $40 coupons, each of which may be used to help pay for the cost of one converter box. All you need to do is apply. It is critical that these consumers understand the DTV transition and take action now to apply for coupons to ensure they are prepared for the transition.