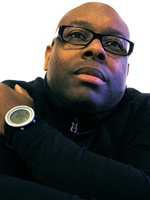 One Portland businessman has just landed the account of a lifetime.
Chad Brown, founder and owner of Chado Advertising and Design, will be developing an advertising and branding program for international clothing manufacturer Epic Group. In October, Brown was invited to make a pitch at the apparel giant's headquarters in Hong Kong. He was up against two other giants in advertising for the contract. He won.
"It was pretty intense and it was pretty hard to achieve," Brown said.
But Brown, a 37-year-old who has a communication design and advertising graduate degree from New York's Pratt Institute, has achieved some fairly intense things in his life. A former Navy soldier who served in Operation Desert Storm and lead convoys in war-torn Somalia, Brown said he still carries the soldier work ethic with him.
"I get up at 4 or 5 a.m. I work constantly," he said. "But I have that civilian in me – I like to play, I like to fly fish …"
Brown moved from New York City to Portland several years ago for a position at Overland Agency, but soon after his contract ended, Brown decided to go into business for himself. Chado Design and Advertising was born. In October of this year, Brown's past came a-calling. A colleague who had once opened the door for Brown to market Russell Simmons' Phat Farm brand wanted him to travel to Hong Kong – all expenses paid. Christiaan Samuels, Epic Group's executive director for marketing and design, wanted the company to hear what Chado could bring to the table
"Personally I took a risk," Brown said. "I got a little cocky."
When the president of Epic Group walked in, Brown says he fed off the man's energy and immediately changed the pitch.
"I didn't have anything to lose anyway. I said 'screw the presentation,'" Brown recalls. "I said, 'Christiaan, I'm going to shoot straight and let him know what I can do.'"
The tactic worked. But it didn't come without a lot of preparation and networking. Brown called in the talents of seasoned copywriters and account managers to help him create a plan for Epic Group. He said he's involved 100 percent in the process – from design to concept to furnishing a business plan. But he also knows where his weaknesses lie, and allows others to step in where he might come in short.
Brown says there are incredible challenges in the advertising career. You have to have the education, the drive and the experience in ad agencies. And like other professions, you have to know how to handle racial stereotypes.
"There was a client of mine – I approached him to do an identity brand," Brown recalls. "He looked at me and made a judgment that I couldn't deliver based on my skin color. He still gave me an opportunity, only with hesitation. I took it and developed the identity. They were completely shocked that I pinpointed and hit it. He said 'I woke up this morning and was thinking about not coming today because I found it hard to believe a person like you could come up with something I couldn't.'"
Brown was also offered a doctoral-level teaching position at the International School of Design in Seoul, South Korea. The job offer was rescinded at the very last moment – when the president of the school was sent a copy of Brown's passport.
"I got an email that they would like to keep their staff blond-haired and blue-eyed. They didn't accept African Americans, Indians, Africans, Mexicans, or anybody like that."
"I was in a dark place," he said.
But instead of spiraling downward, Brown printed out the email and posted it at his work station. Anytime he feels discouraged or tired, he looks at the email and it keeps him fighting.
In China, he knew he had to transcend racial stereotypes. In making his presentation, Brown said he had to become a project director.
"When you learn to transcend yourself, you become your work," he says.
Currently, Brown is developing the Epic Group's brand identity and advertising strategy. He's meeting with his Chinese counterparts over video conference, usually at 7 or 8 in the evening, when China is preparing for a mid-morning coffee break. He knows another trip to Hong Kong is in his future, but he's still unsure of how often he'll need to travel.