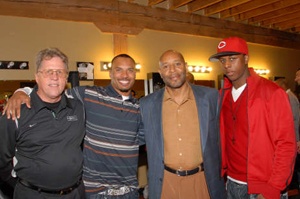 Guests came from around the nation to the opening event. At left, Al Egg, a chaplain to sports professionals is a past chaplain for the Portland TrailBlazers, who currently works with Portland State University; Rashad Floyd, a player with the Colorado Crush in the AFL; Tony Hopson Sr., president and CEO of Self Enhancement, Inc.; and Green Bay Packer, Shaun Bodiford.


The grand opening of Art Williams' and Jamaal Lane's Champions Barbershop, at 3827 NE MLK Jr. Blvd., featured Portland TrailBlazers Greg Oden, LaMarcus Aldridge, Brandon Roy and Martell Webster.
Other special guests included Shaun Bodiford of the Green Bay Packers, Colorado Crush player Rashad Floyd, and Self Enhancement President and CEO Tony Hopson Sr. Music was provided by DJ OG One.
The mix of supporters is no accident; Williams and Lane are kicking off a sports-themed barbershop with an eye toward community service.
"And as much or as often as you can ride up and down Martin Luther King, you'll see 10, 20 barber shops and beauty salons," Williams said. "We always wanted to own our own barbershop, but we wanted to think about what would make us different than every other barbershop that opens."

The sports theme was a natural. The two have worked as barbers at Reggie's Barber Shop for the past five years, where they counted among their clients some of the hotshots of Portland sports.
"Jamal and myself, we cut a lot of the Blazers' hair, and they've been coming in since they've been in town, especially the new guys," Williams said. "Greg Oden used to come in our old barber shop, LaMarcus Aldridge, Brandon Roy, all of the guys that we've invited to the grand opening are all customers of ours."
Williams, whose wife Patricia Williams is on the staff of Self Enhancement, Inc., says he and Lane wanted to create something more than just a storefront for style.

"We wanted to come up with a concept that could impact the community in a way that would leave a legacy, basically," Williams says. "So we put our heads together, and both of us are passionate about the young people in the community and just change, period, in this time and day, and just being an influence and positive example for people."
During their grand opening Oct. 25, customers who brought three cans of food or more got a $5 discount off their haircuts. The food was donated to the Self Enhancement, Inc. annual holiday Thanksgiving basket program.
The shop is upscale. Housed in a newly-renovated building, it offers free wi-fi, a coffee bar and a kid's corner.
"Especially when you think about Martin Luther King Jr. Boulevard, you don't really think upscale sometimes, even though things are changing now," Williams said. "The buildings are being renovated, it's a new storefront, and we just decided we were just going to come together, Jamal and myself, and we were going to create something that was who we are, that represents us."
Turning the opening of Champions Barbershop into a benefit for SEI was also a natural.
As the most respected and effective youth development program in the area – one which has become a nationwide model serving thousands of youth and their families – SEI itself started more than two decades ago as a basketball camp for high school boys.
"For the most part to be a Champion means you're at the top of your game, you're in the top echelon and you're the best at what you do," Williams said. "I'm not bragging that we are the best at what we do but we want to be the best."
For more information call Champions Barbershop at 503-548-3263.